Leclerc, Ericsson to race for Sauber in 2018

Leclerc, Ericsson to race for Sauber in 2018

Charles Leclerc will graduate to Formula 1 with Sauber 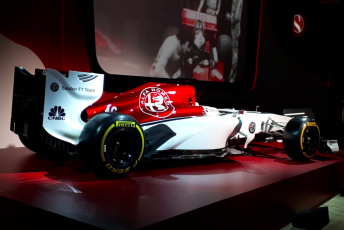 Livery concept for the Sauber Alfa Romeo F1 team for 2018

Ferrari chairman Sergio Marchionne has announced that Charles Leclerc and Marcus Ericsson will race for Sauber in Formula 1 next season.

Ericsson had been in a fight with Antonio Giovinazzi for the second seat at Sauber, which will have closer ties with Ferrari next season thanks to a partnership with Alfa Romeo.

Although the initial idea of an Alfa Romeo team was triggered because Marchionne wanted a proving ground for young Italian racers, Ericsson’s close ties with Sauber’s owners eventually won out.

The announcement was made at the launch of the new Alfa Romeo partnership in Italy on Saturday, when Marchionne confirmed the expected news that Leclerc will be stepping up to F1 after a dominant campaign in F2.

Sauber has undergone a dramatic change of direction this year after former team principal Monisha Kaltenborn was moved aside in favour of Frederic Vasseur.

A plan to run Honda engines in 2018 was abandoned swiftly, as Vasseur believed that the future of the team was best served by getting much closer to Ferrari.

A customer engine deal was believed to include an agreement for it to take one of Ferrari’s young drivers, with Leclerc’s speed this year making it clear he was the preferred option to take the first seat.

And although Giovinazzi was in contention for much of the year to step up to a full-time F1 seat, Sauber’s management team has strong ties with Ericsson’s Swedish backers – and this is likely to have swayed the final decision on this front.