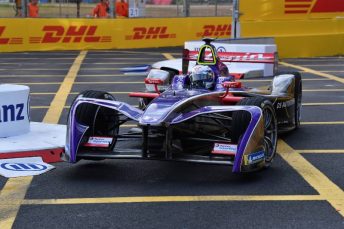 Sam Bird has won the opening Formula E race of the 2017/18 season despite copping a drive-through penalty in Hong Kong.

The DS Virgin driver moved into the lead shortly before serving his mid-race car change, only to slide wide of his pit box and pick up a penalty.

However the pit lane on the Hong Kong circuit is such that Bird lost just eight seconds, meaning he rejoined still in control of proceedings.

In second was Jean-Eric Vergne, who led the opening 20 laps from Bird before finding himself caught in traffic after serving his stop.

Nick Heidfeld completed the podium, the German pushing Vergne in the second half of the race without reward.

Their battle, coupled with traffic for Vergne as he emerged from his car-change, delayed them such that Bird was able to serve his penalty and narrowly resume ahead of the pair.

The first red flag in Formula E history was shown on the opening lap when Andre Lotterer found the wall while battling in the middle of the pack.

With nowhere to go for those behind, the road was soon blocked forcing officials to stop the race.

When action resumed, Vergne and Bird edged their way clear of the pack, with the pass for the lead happening on lap 20.

A battery management problem saw Sebastien Buemi stop on track shortly after his stop, but was able to get going once again.

Bird ended the 43-lap race 11.5 seconds ahead of Vergne, who had Heidfeld glued to his gearbox in third.

There was late drama post-race, with race winner Bird handed a 10 place penalty for Sunday’s Race 2 for ‘dangerous driving’ in pit lane.

The DS Virgin maintains the race lead, and therefore the championship lead.

The second round of the Formula E season also takes in the Hong Kong streets on Sunday at 1500 local time.