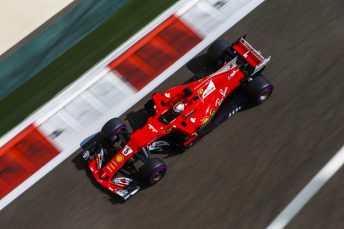 Sebastian Vettel has set the fastest lap of the two-day Abu Dhabi tyre test on the final day of on-track Formula 1 action for 2017.

Despite a spin which saw him make contact with the barriers, Vettel used Pirelli’s new hypersoft compound to lap the Yas Marina Circuit in 1:37.551s during the morning.

His time best his Ferrari team-mate Kimi Raikkonen’s Day 1 benchmark and anyone else on Day 2.

Valtteri Bottas was second-fastest and nearly a second away in the Mercedes, and Max Verstappen third-fastest in the Red Bull.

Robert Kubica was back in action in the Williams, taking on hypersoft tyres for a later-day effort which put him seventh-fastest.

Sergey Sirotkin had driven the FW40 earlier in the day and set his personal best lap on soft tyres, good enough for 10th-fastest.

Charles Leclerc drove the Sauber, the team which he is expected to drive for next year, to 11th with a day-high 149 laps.