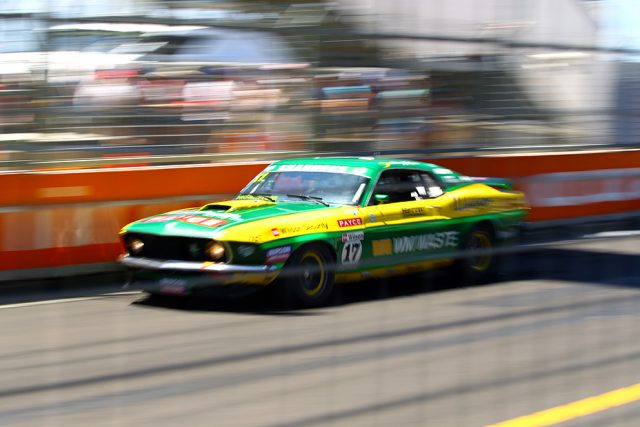 The Ford Mustang driver clinched a come-from-behind win in the title fight with John Bowe at Newcastle, after a season-long battle which saw him start off on the back foot when an oil-line burst at Clipsal.

It is the first national series title of his career, which started in the early 1990s racing sports sedans before competing in more than 400 Supercars races, netting a third place at Bathurst in 2007.

“I tried not to think about it too much because when you start thinking about it and what could happen, what couldn’t happen, you tear yourself up inside,” Johnson said when asked by Speedcafe.com about his title win.

“Even though its TCM, I think nowadays the competitiveness in this category has just stepped up so much.

“For anyone that thinks that it’s easy to win a TCM championship they are very wrong.”

Johnson won both races at Newcastle to overhaul the narrow points advantage Bowe had heading into the weekend, athough suggests the turning point in his season came midway through the campaign.

“The key moment for me, I think was probably Darwin,” he reasoned.

“We really came back strong at Darwin and qualified on pole and we won the first race.

“I actually let JB win the second race because I was more worried about getting too much rev penalty, especially coming into places like Queensland Raceway, Sandown and Bathurst.

“For the three race meetings after that when I rolled out of it and let him past down the straight, I’m thinking back, thinking ‘I hope that doesn’t lose me the championship’.

“Queensland Raceway was a bit of a disappointment really,” he continued.

“I thought a home race, I could go well there, and we struggled there. We struggled to finish third even.

“I think those days are the ones that really set you up for the championship, those bad days that you can make the most out of.

“Sandown was great, we had good pace there. Bathurst was unbelievable and Newcastle was an amazing Sunday.”

While the title victory means Johnson is now eligible to run #1 next season, he remains unsure whether he’ll switch from the family’s traditional #17.

“The whole Johnson motorsport background has been 17,” he said.

“It’s one of those things that it’s just synonymous for us, and I think a lot of people probably think 17 has been more unlucky than it has been lucky.

“I guess you don’t need that extra target on your back.

“People know who you are and what you’ve done, you would think, especially in the category.”

Johnson ended the season on 917 points, beating Bowe on 906 and Adam Bressington on 881.