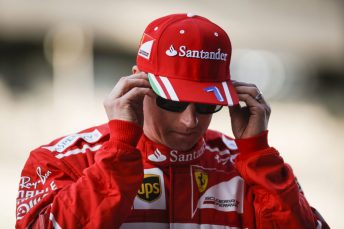 Kimi Raikkonen has set the fastest lap time on the first of two days of Formula 1 tyre testing in Abu Dhabi as Robert Kubica turned laps for Williams.

All drivers except for Kubica set their respective best laps on the new Pirelli hypersoft compound, which will be introduced to the championship next year.

Raikkonen lapped the Yas Marina Circuit in a fastest time of 1:37.768s in his Ferrari, while Daniel Ricciardo was just under 0.3s adrift in his Red Bull.

Lewis Hamilton was third-fastest as he drove his Mercedes around the circuit 123 times, a tally second only to fourth-fastest Romain Grosjean in a Haas car.

Lance Stroll was next-best in the car he shared with Kubica, the Pole’s first steer of a 2017 Williams.

Kubica could only manage ninth-fastest in his 100 laps, but his best was completed on the soft compound.

He will be back in the car for the Wednesday of testing.

Fernando Alonso crashed his McLaren in the morning but was still good enough for sixth-fastest.

With all teams except McLaren, which had its post-Brazilian Grand Prix tyre test cancelled due to safety concerns, running one car only, Ricciardo will sit out Wednesday when Max Verstappen takes over the Red Bull.