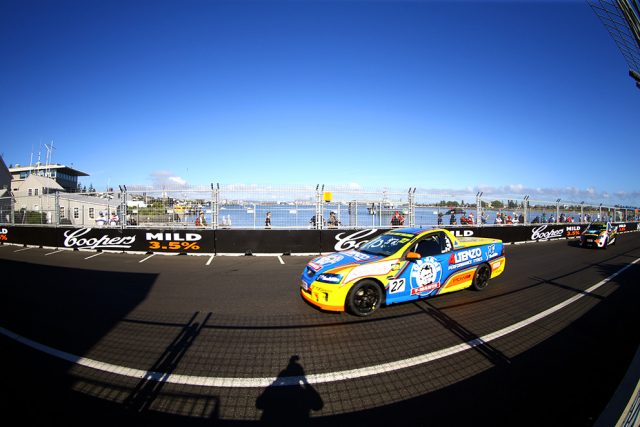 Kim Jane says that a long-awaited V8 Ute Racing Series win is a reward for the effort which his small team has made this year.

Jane finally broke through to take the title in his 15th season in V8 Utes, which wrapped up its 17th and final season in Newcastle before transforming into SuperUtes next year.

The title battle had been a contest between he and three-time series winner Ryal Harris all season, and went down to the very last race with Jane eventually winning by two points in controversial circumstances.

Jane was set to move into the Toyota 86 Racing Series due to the original plan for SuperUtes to kick off in Townsville, but saw out the full season in V8 Utes. 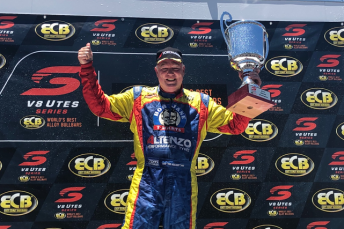 “Last year when the David Murphy Motorsport crew ran the car, we just turned up and did our thing and drove.

“The year before that, it was Erebus; we had a big budget.

“At the start of (this) year there were only two rounds, so we bought that Toyota, and ran it at Phillip Island as well as the ute.

“When they extended (the V8 Ute Racing Series), we had to go back and find more budget.

“I drove the truck to Townsville, one of the other crew guys drove it back, doing whatever we can to get through the year and the bank balance just scraped it in.

“To do it like the way we’ve done it, and 15 years in the series… it’s just amazing. I can’t describe it”

The final race of the season began in dramatic fashion when Harris hit the side of Aaron Cameron’s Falcon at Turn 1.

While Harris narrowly avoided collecting Cameron when he rebounded off the tyre wall, he was issued a 10 second time penalty halfway through the race.

The pre-Newcastle series leader sat fourth on the road at the time and similarly elbowed his way past Jane three laps later to take over third, but the extra time relegated him to ninth.

The outcome, a 26-point swing across the weekend, marked a major turnaround after Jane’s hopes took a hit when he was spun by Mason Barbera in the penultimate round on the Gold Coast.

“With Mason, I’ve half-forgiven him now but we were gutted,” recalled Jane.

“To not be able to really take the fight in… but then we put a bit of pressure on Harris.

“In qualifying, we had the fastest lap, we came in, we knew we could go quicker because I totally messed up the Hairpin up on my quickest lap, so I knew we had more speed.

“I thought ‘There’s nothing I can do,’ it wasn’t going to change what’s going to happen so I’ve just got to put more pressure on him, and if he had 50 points he would have driven around, sliding around everywhere (and won the series).”

Jane says that he hopes to be able to return next year in a SuperUte.

The season kicks off at Adelaide on March 1-4.