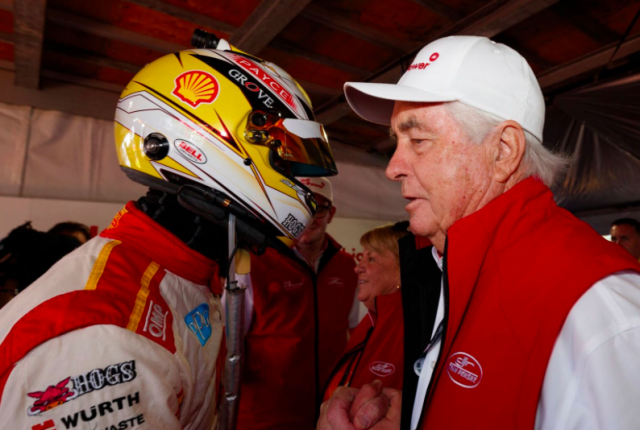 The distinguished billionaire businessman and racing legend made a rare trip from America to cheer on his Shell V-Power Racing Team at the championship finale on the weekend.

Penske described the high drama climax to the Supercars season as a ‘tough outcome’ for his driver McLaughlin after the 24-year-old saw his title hopes disappear on the final lap of Sunday’s title decider.

McLaughlin copped a 25 second penalty for causing a collision with Craig Lowndes on the penultimate lap while fighting over a crucial 11th position required to secure the title.

While he crossed the finish line in the spot needed to lift the trophy, the penalty dropped McLaughlin to 18th, handing Jamie Whincup a seventh career championship.

It proved to be a tough day for the Kiwi, who was handed a drive-through for pit lane speeding and a 15 second penalty for spinning Simona de Silvestro earlier in the race.

“It was a tough outcome, obviously. I really question that drive-through penalty (for speeding),” Penske told Speedcafe.com.

“That really put us behind the eight ball. And then he came back through the pack and on that restart, it got jammed up and he got knocked around.

“But I thought he did a great job coming back and getting into 11th.

“And I’m not really sure what happened with Lowndes. It looked like, you know, he was there (McLaughlin was past Lowndes) and to give us a 25 seconds penalty is pretty outrageous. But it is what it is.

“I think he went for it for the last 20 laps there when he knew what he had to do and I think he drove a masterful race.

“At the end, it was just a tough outcome from the standpoint where Lowndes was obviously trying to get ahead of him because he would have been the safety valve for Triple Eight.

“But, look, it’s the outcome, we can’t do anything about it and we’re happy that we got what we wanted (the teams’ title).

“We’ll be back next year and it’ll be a battle again.”

Penske was however quick to congratulate Whincup and Triple Eight for their success, which arrived a day after DJR Team Penske claimed the coveted teams’ title.

“Congratulations to (Jamie) Whincup and Roland (Dane Triple Eight team boss) and the guys down there (in the Triple Eight garage). We’ll take the teams’ championship and go home,” he said.

Although disappointed to see Mclaughlin miss out on the championship, Penske hailed his driver’s resolve after being forced to battle through the field twice during Sunday’s race.

“The job he’s (Scott) done and to see him come back through the field a couple of times was masterful,” Penske added.

“The guys here just did a terrific job, the whole team, and it was just disappointing at the end, but that’s racing.

“We’ve been there before. It’s a big lump, but you have to take it and move on.”