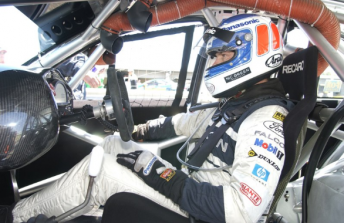 Neil Crompton behind the wheel during his final Supercars season

Neil Crompton has expressed his appreciation at being honoured as the 2017 inductee into the Supercars Hall of Fame.

The 57-year-old is a former Supercars driver and now long-time commentator, essentially becoming the voice of the category through an unbroken run on Supercars Championship telecasts from 2003.

“Thank you so much,” said Crompton.

“I got word that this may be happening and my first thought was ‘What are you thinking?’, because I don’t believe that I’m credentialed like those that have come before me, but I am deeply honoured and I thank you very, very much.”

Crompton’s introduction to motorsport was as a motocross rider during his childhood years and early adulthood, before taking up production car racing in 1985.

During that time, he drove for Peter Brock and was also one of the Holden Racing Team’s inaugural drivers in its original incarnation, though he did not race for the team until the enduros of 1989.

After his first full season with Bob Forbes Racing, Crompton spent four years with Wayne Gardner Racing, before switching to Glenn Seton’s Ford team, initially for a partial campaign, in 1998.

Crompton stepped back to a co-driver role with Craig Lowndes upon Gibson Motorsport’s first season as a Ford team in 2001.

He took up a full-season role with the team’s transformation into 00 Motorsport and expansion to three cars the next year, which was his last as a Supercars driver before retiring.

Amid various touring car deals, Crompton raced a diverse range of categories including sports sedans, open-wheelers, and the North American Super Touring Championship, though his career highlight is arguably outright victory in the 1994 Bathurst 12 Hour in a Mazda RX-7.

Intertwined with his racing career, the Ballarat-born driver has also been a three-decade-plus member of motorsport telecasts across Seven, Ten, the ABC, SBS, ESPN, and most recently as part of Supercars’ in-house production.

He followed Supercars to Seven in 2007, and has since been heard again on Ten as well as Fox Sports as part of the Supercars Media production.

Following the departure of Matthew White from Seven midway through 2014, Crompton took up a regular role as the play-by-play (lead) commentator, and again on Supercars’ world feed from 2016 to present.

He has also fronted motorsport programs on Triple M and Telstra’s online content service BigPond, and commentated for the big screen at Formula 1 grands prix in Australia and Singapore.

Crompton joined the Supercars Commission as the Independent Commissioner in 2013, a role he still holds today.

He is also the category administrator for the Toyota 86 Racing Series and television producer through his own company AirTime Autosport.

VIDEO: Neil Crompton inducted into the Supercars Hall of Fame