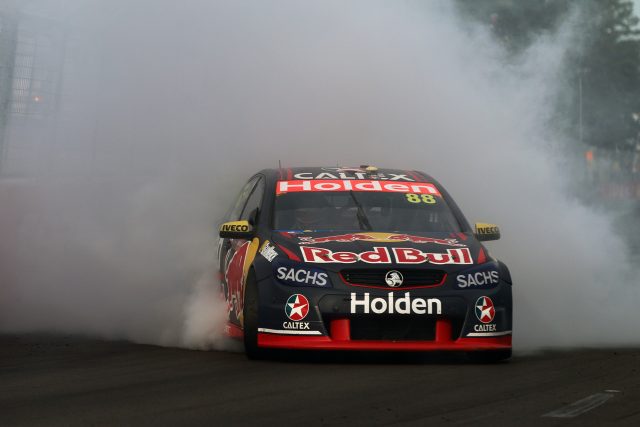 The Red Bull Holden Racing Team took victory in an edge of the seat thriller of a finale as the championship swung between Whincup and McLaughlin on several occasions through a topsy-turvy race which ended in high drama.

McLaughlin crossed the finish line in 11th which was enough to secure the title after being hit by two in race penalties early in the race.

However the title was snatched from his grasp by a penalty in the dying moments.

The Kiwi passed James Moffat on the penultimate lap which put him in title contention, but contact with Craig Lowndes on the run between Turn 1 and Turn 2 saw the latter hit the wall and spin out of the race.

The incident saw stewards hand down a pit lane penalty just before the chequered flag which demoted McLaughlin to 18th.

It handed Whincup an unlikely title after admitting he needed a miracle following the driver error which dented his hopes on Saturday.

“Never say die, but I had sort of written myself off,” admitted Whincup.

“We needed a lot of luck today and it came our way. Just as car #17 had bad luck we had similar thing yesterday, but massive respect for car #17 – he’ll probably go on and win the next eight.

“It was a proper battle this year, we did what we could, grabbed every point we could and got the chocolates.”

McLaughlin cut a dejected figure post-race following the penalty for his involvement in the Lowndes incident.

“I lost my left-hand mirror so early and I had no…obviously I knew we were close but I didn’t think we were that close.

“I just defended the line to two and then we got inter-locked and caught up, I genuinely didn’t mean to push him to the wall.”

McLaughlin made no mistake at the start as he converted his pole position into a lead from van Gisbergen.

However, the championship battle was soon turned on its head when the New Zealander was issued a drive-through penalty for speeding in pit lane when he took his first top from the lead after 15 laps.

The penalty dropped him to 22nd putting the title back in the hands of Jamie Whincup, who climbed from fifth to third after the first round of stops.

McLaughlin quickly surged back up to 12th with a series of moves that hauled him back into title contention only for his bid to suffer another blow when he tagged the impressive Simona de Silvestro (Nissan Motorsport) while fighting over 11th spot at Turn 2.

Stewards issued a 15 second penalty to McLaughlin, which dropped him to 23rd position and out of the title hunt when he served it at his second stop on Lap 50.

Meanwhile, at the front van Gisbergen jumped to the lead with a pass on David Reynolds with Whincup in third.

This soon became second as Whincup leapfrogged the Erebus Motorsport driver to second in the final stops.

McLaughlin was then handed a lifeline when the Safety Car was called after Lucas Dumbrell Motorsport’s Taz Douglas found the wall, bunching up the field in the process.

It left the 24-year-old with 45 laps to reach the all important 11th spot required to take the title but his job was made harder when van Gisbergen let Whincup through to the lead following the restart.

McLaughlin managed to scythe his way to 13th before the race was neutralised again for debris deposited by James Courtney on the circuit at Turn 9.

Only the two Commodores of his former team Garry Rogers Motorsport stood in the way when the action restarted on lap 73.

Unbelievably McLaughlin found himself in another incident on the restart when Scott Pye dived underneath the Ford at Turn 1, which resulted in contact before another hit from Jason Bright as the field bottled up.

He soon came under pressure from a resurgent Craig Lowndes while he pursued James Moffat and Garth Tander, putting a gusty move on Tander.

Another move on Moffat for the crucial 11th spot at the hairpin on lap 93 followed, though it was to come to nothing as the clash with Lowndes at the start of lap 94 resulted in the penalty which snatched the title from his grasp.

While all eyes were on the battle for the victory and the title, Rick Kelly produced a strong drive to claim fourth ahead of Nissan team-mate Michael Caruso.

The top 10 was rounded out by Lee Holdsworth (Preston Hire Racing), Will Davison (Tekno Autosports) and Todd Kelly in his final ever Supercars race.

The only other retirement from the race was the #12 DJR Team Penske Ford of Fabian Coulthard, who suffered a driveline failure after 15 laps.