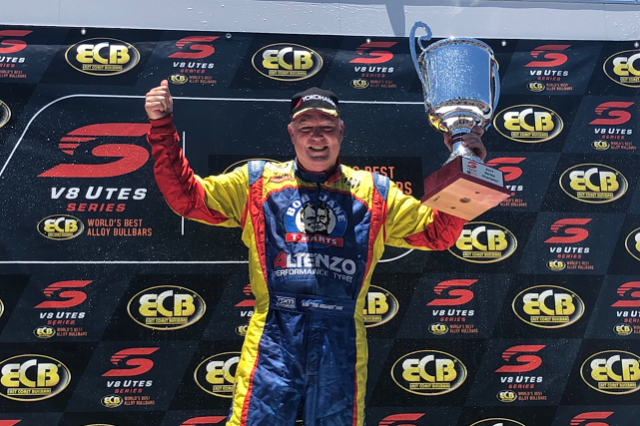 Kim Jane has won the 2017 V8 Ute Racing Series winner as debutant Matt Griffin took out the category’s last ever race on the streets of Newcastle.

Previous series leader Ryal Harris lost the title due to a 10-second penalty for contact on the opening corner, falling two points short of a fourth series crown.

Griffin sat first on the grid by virtue of earlier results including his Race 1 win and made a good start to lead the field into the first corner.

Behind him, Harris got into the side of Aaron Cameron, putting the latter into the Turn 1 tyre wall.

The Safety Car was called when Gus Robbins’ Falcon caught fire on Lap 1, before a restart on Lap 5 when Griffin took margin and was unchallenged thereafter.

Harris, having now been issued the time penalty, elbowed past Jane at Turn 7 to move into third on Lap 8.

However, he couldn’t put enough margin on those further back in the final two laps, and was demoted to ninth when the final results shook out.

Michael Sieders equalled his personal best race result of second, achieved only a day earlier in Race 1, with Jane officially third in the race.

The breakthrough V8 Utes title for Jane comes in his 15th season in the series, which has enjoyed a 17-year lifespan. Justin Ruggier slipped by Kel Treseder to take out the final Aussie Racing Cars race of the year, while James Duckworth became a back-to-back series winner.

Treseder got the jump and took a clear lead to the first corner, ahead of Joel Heinrich, Ruggier, and Duckworth.

Ruggier passed Heinrich on Lap 3 and closed up on Treseder, making a slick move past the winner of the first two races of the weekend at Turn 7 on Lap 8.

Treseder stuck with Ruggier for the remaining three laps but couldn’t mount a challenge to reclaim the position, though he still won the round.

Heinrich finished third, ahead of Jaie Robson and Blake Sciberras.

Duckworth was clearly content to play safe, having let Robson past up Watt Street on Lap 4, and sixth in Race 3 good enough to win the title. Cameron Hill rounded out the 2017 Toyota Racing Series with victory in the final race of the season on the streets of Newcastle.

Hill ran away with the race to win by almost nine seconds over Steve Owen in a chaotic 11-lap encounter.

A spin for Chris Manley on Lap 2 drew the Safety Car, before two separate incidents following the Lap 6 restart saw a number of changes inside the Top 10.

Liam McAdam suffered an incident on the approach to the hairpin which saw he and Aaron Seton retire from the race.

There was also wheel to wheel contact between Jimmy Vernon and Nicholas Carroll on the exit of the penultimate corner as they battled for third, taking them both out of proceedings.

Victory for Hill saw him solidify second in the title fight behind Vernon, who’d been crowned champion at the previous round at Bathurst, with Dylan Thomas’ consistent season rewarded with third for the year.