Supercars title is among Penske’s greatest

Supercars title is among Penske’s greatest 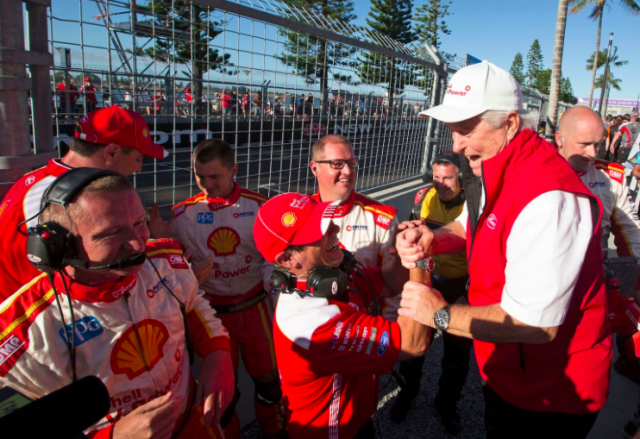 Roger Penske rates winning the Supercars teams’ championship as one of the greatest achievements in Team Penske’s half century of unrivalled successes.

Scott McLaughlin and Fabian Coulthard secured the title for DJR Team Penske by finishing 1-2 in Saturday’s opening race of the Coates Hire Newcastle 500.

“I think you’d have to put it close to the very top because within three years to be as competitive as we’ve been this year is really amazing,” Penske told Speedcafe.com.

Team Penske is the most successful squad in American racing history, winning a record 16 Indianapolis 500s, 31 national championships in IndyCar, NASCAR, sports cars and Trans-Am, and more than 470 major races in 51 years.

The Supercars teams’ championship is Team Penske’s first title outside North America, making it especially significant to the 80-year-old tycoon, who extended his international business operations to Australia and New Zealand in mid-2013.

Penske puts Shell V-Power Racing’s Supercars crown on a par with his IndyCar squad’s most recent landmark successes in the 2015 Indy 500 and back-to-back championships in 2016/17.

“This is one of the best accomplishments we’ve done in the last three years,” he said.

“People don’t know much about this series in the US, but I can tell you this a real big deal.”

With McLaughlin also poised to add the drivers’ championship to DJR Team Penske’s trophy haul, Penske admitted that the squad has exceeded his expectations this year.

“Absolutely,” he said. “I think’s it’s been pretty amazing. I’m thrilled. I take my hat off to all the guys.

“Fabian and Scotty have over-achieved from the standpoint of what we had expected. If you started the season and said you could have the number of wins we had or even half of that, you’d have been very excited.

“The payback is that our sponsors are getting a lot more than they expected. So, commercially, this has been a terrific year for us.”

He added that the arrival of McLaughlin and ex-Triple Eight technical guru Ludo Lacroix lifted the team, as well as acknowledging the trackside leadership of team manager Ben Croke.

“Certainly, Scott and Fabian have gotten along well together, which is important, and Ludo has really created a can do, let’s go attitude on the engineering side and we’ve had the opportunity to bring some other good young people on board,” Penske said.

“Ben Croke has matured another year with us, so this has been all about building. The teams that we’re racing, they’ve been doing this for eight or 10 years with lots of success, so it’s not easy to get on the train.

Penske is so proud that he is likely to extend his visit to celebrate with the team at Monday’s night’s Supercars awards gala in Sydney.

“From a business standpoint, this has been a huge brand-builder for us throughout the whole country,” Penske said.

DJR Team Penske is hosting around 150 corporate guests at the Newcastle 500.