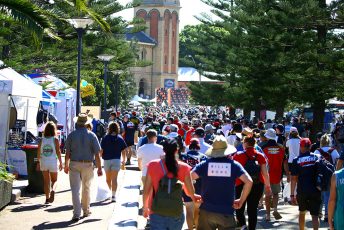 The inaugural Coates Hire Newcastle 500 has been heralded a runaway success by organisers with more than 190,000 fans attending the event over its three days.

Replacing Homebush as the final round of the Virgin Australia Supercars Championship, the Newcastle street circuit drew a crowd of 56,478 on Friday alone.

More than 69,500 fans took in Saturday’s race and another 66,200 passed through the turnstiles on Sunday to watch Jamie Whincup claim his seventh Supercars title.

“This weekend is all we hoped it would be; and to be honest we exceeded our expectations,” said Supercars CEO James Warburton.

“The venue is incredible; the crowds have been huge and the live pictures of the boats, ships, the harbour, the beaches and Newcastle being beamed live around Australia and the world are amazing.

“It is a credit to Destination New South Wales and Newcastle City Council to support our vision and deliver such a fantastic event to the City.”

“We have been so lucky with the beautiful weather, but the success of the first-ever Newcastle 500 hinged on so much more than that.

“The planning, the dedication and the passion of everyone involved has really shone through and made this a landmark weekend in Newcastle’s history.”

Under its initial contract, Newcastle is set to host the final round of the Virgin Australia Supercars Championship until 2021.