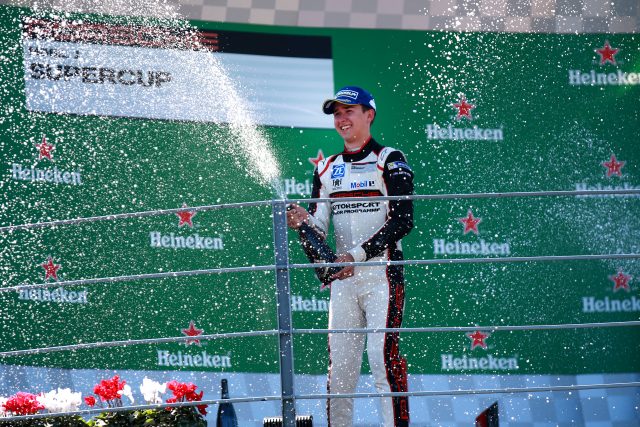 Matt Campbell will continue as part of Porsche’s youth development programme with confirmation that he will be part of the German marque’s GT racing scene in 2018.

The finer details of the 22-year-old’s schedule are yet to be announced but the Queenslander could be set for outings in the WEC, IMSA in the USA and other major races, including the Nürburgring 24 Hour and the Bathurst 12 Hour.

Campbell’s recent rise has come off the back of his domination of the 2016 Australian Carrera Cup title which saw him invited to the Porsche Junior Shootout.

He was awarded a funded drive in the Porsche Mobil 1 Supercup where he took victory in Austria, Italy and Mexico on the same weekends as F1.

He was also a key member of the Porsche GT3 entry from Competition Motorsports at this year’s Bathurst 12 Hour which finished second.

The Queenslander also sampled the 911 RSR WEC GTLM version of the Porsche in a closed test during the year and co drove with Shane van Gisbergen in the Red Bull Holden Racing Team Commodore at Sandown, Bathurst and the Gold Coast.

“I am going into a Porsche Young Professional role which is moving out of the Cup series and into GT Racing and taking the next step in my career,” Campbell told Speedcafe.

“I have seen the draft of what I will be doing and I can’t wait for the next year to start. It’s what I really wanted to do and to continue with Porsche, I could not be happier.

“I look back at last year and winning the Carrera Cup in Australia and then winning the Junior Shootout, that combined presented me this next opportunity.

“I am extremely grateful and want to repay the faith of my supporters and Porsche.”

The German-based Aussie was announced along with fellow Supercup racer Dennis Olsen (Norway) as GT racers in 2018.

Thomas Preining from Austria makes the step up from the Porsche Carrera Cup Deutschland to the Porsche Mobil 1 Supercup, where he will be supported as a Porsche Junior.

“The one-make cups, in particular, have proven to be an outstanding springboard for the Porsche Juniors.”

Porsche will hold its Night of Champions event in December, where Campbell’s full programme for 2018 will be announced.

He will be joined at that event by Carrera Cup Australia title winners David Wall and Stephen Grove, as well as the other Carrera Cup champions from across the globe.