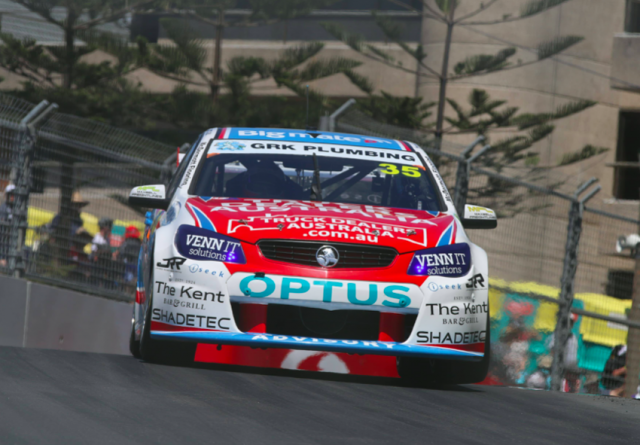 Todd Hazelwood has clinched the 2017 Dunlop Super2 Series, winning the final race of the season after an intra-team crash in front of him in Newcastle.

An extremely conservative Hazelwood brought the #35 Matt Stone Racing VF Commodore second on the road but Shae Davies copped a post-race penalty due to a final-lap coming-together while battling for the lead with Jack Le Brocq.

Paul Dumbrell, Hazelwood’s only title rival, finished 13th after qualifying second-last due to a driveline problem.

“I can’t believe it,” exclaimed Hazelwood.

“That’s the hardest race I’ve done in my whole career (and) I’ve been racing for a while now.

“Tell you what, I’ve never had cramps like that in my guts in a long time so I don’t know where that come from but I’m just over the moon.”

The pole-sitting Hazelwood lit up his rear tyres at the start, losing first position to Will Brown off the line and second to Davies as the field went through the first corner.

Le Brocq, like Davies, took advantage of Hazelwood’s title focus to make an easy pass at Turn 7 on Lap 3, driving through a huge hole left by the South Australian.

Brown looked to be on for his first race win in Super2, enjoying a comfortable lead which ebbed and flowed around one second.

However, disaster struck for the rookie on Lap 16 when his #38 Eggleston Motorsport VF Commodore ground to a halt.

Brown managed to get mobile again, but only to drive back to the pits.

His misfortune put Davies into the lead, with MW Motorsport stablemate Le Brocq close behind.

More drama then struck at the top of Watt Street on the 20th and final lap, when Le Brocq attempted to round up the #26 Altima, only to be turned into the wall on exit.

Hazelwood was elevated from third to second as a result, while Davies pressed on.

However, Race Control issued the equivalent of a drive-through penalty shortly after the chequered flag, which meant that Hazelwood would cap off his breakthrough season with a sweep of the round.

The result meant that Fullwood finished second for the weekend, his best round result in Super2.

Richard Muscat and Anton de Pasquale rounded out the top five for Race 2.

Davies was relegated to 11th, but at least collected enough points to place third for the round.

Dumbrell ran as high as 12th, having needed to finish in front of Hazelwood to win the series, before twice losing ground late in the race.

Outgoing series winner Garry Jacobson had another frustrating race, first taken out by Jack Perkins early on then running off later on while trying to make up ground.

The Prodrive driver had to come to the pits before finishing 17th, one place better than Perkins.

Le Brocq didn’t make the finish, but still held onto third in the series standings.