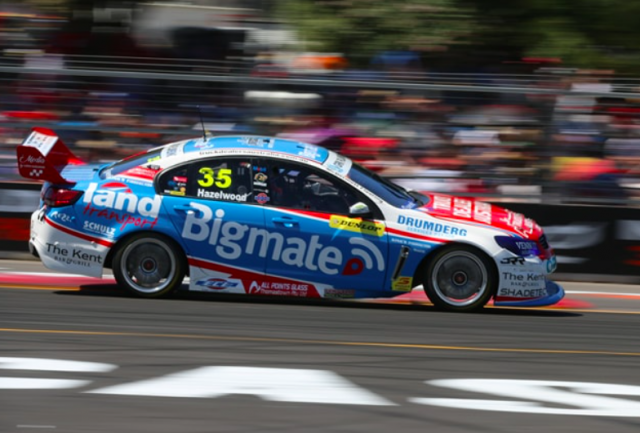 Todd Hazelwood is in the box seat to win this year’s Dunlop Super2 Series after he qualified on pole for the final race as Paul Dumbrell suffered driveline problems.

Dumbrell was first car on-track but his struggles to pull up the #88 Eggleston Motorsport Commodore this weekend continued almost immediately when he ran on at Nobbys Hairpin on his first flyer.

That moment left him 21st after the first runs and there was no improvement when he parked the car with driveline problems soon into his second run.

“After the bad mistake yesterday I just wanted to redeem ourselves today so it makes it pretty tough now,” Dumbrell lamented in reference to his crash in Saturday’s qualifying session.

“(It’s) just a driveline problem so I’ve got no drive. Hey, that’s motorsport, isn’t it?”

Jack Le Brocq (#28 Altima) provided a stern challenge to Hazelwood in the 15-minute session and he sat atop the timesheets after the first runs.

They traded top spot in the final minutes before Hazelwood took the #35 Matt Stone Racing VF Commodore around the Newcastle East Street Circuit in 1:11.4137s.

That time proved enough for his second pole of the weekend and also helped make him the 2017 Armor All Pole Champion in Super2.

“I pushed hard then and just like yesterday I knew how important qualifying was and just had to use the same mindset and just put it all on the line and try and put a lap together, and did exactly that,” said Hazelwood.

“The boys at Matt Stone deserve this and I’ll be buying them a lot of beers tonight.”

Will Brown (#38 Eggleston Motorsport VF Commodore) earned the outside front row grid position before surviving a late excursion into a run-off area, bumping Le Brocq back to third.

Le Brocq will have one MW Motorsport team-mate in Shae Davies (#26 Altima) starting alongside and the other in Bryce Fullwood (#16 Altima) behind him in fifth, while Macauley Jones (#14 Brad Jones Racing VF Commodore) qualified sixth.

Jack Perkins (#4 Dragon Motor Racing VF Commodore) was briefly quickest as he started his second run early, settling in seventh position before his attempts to improve were dashed by sliding into the tyre wall at Turn 1.

The top 10 was rounded out by Anton de Pasquale, Garry Jacobson, and Richard Muscat.

Dumbrell faces an extremely difficult task to overhaul Hazelwood’s 11-point series lead this afternoon, with the title decided over 20 laps at 1420 local time/AEDT.