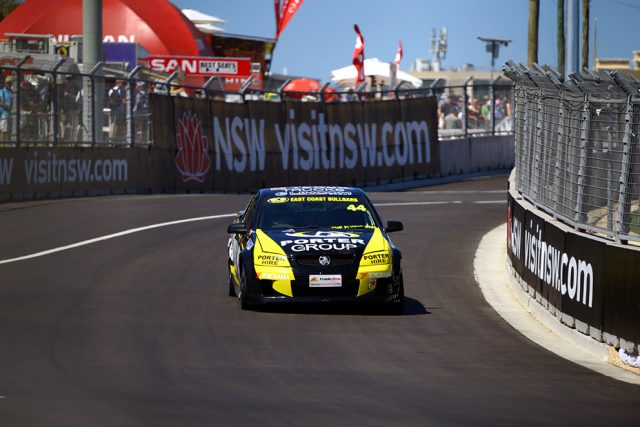 Auckland driver Matt Griffin has won his first ever V8 Utes race in Race 1 in Newcastle.

Kim Jane showed the pole-sitting Griffin a clean pair of heels from the outside of the front row before a Safety Car on Lap 2 for Marcus Zukanovic, who had buried his Falcon in the tyre wall at Turn 1.

When the race finally restarted on Lap 7, Griffin got underneath Jane at the top of Watt Street, and while Jane tried to criss-cross down the hill he got out of the move.

Instead, Jane got loose at Turn 10 and scraped the wall a lap later, losing positions to Michael Sieders and Aaron Cameron.

Griffin, who had already pulled a second-plus lead, took a comfortable win while Jane made it home in fourth to take a chunk out of Ryal Harris’ series lead, now just 16 points.

Harris moved from 12th to eighth during the race after copping a 10-position grid penalty when he was judged to be at fault for the crash between he and Griffin in qualifying.

The incident, which saw two spectators suffer minor injuries when a tyre flew over the catch fence, began when Griffin slowed exiting Turn 9.

Harris attempted to pass at the dogleg in the track but the two made contact, putting both cars in the wall.

The pair had been duelling for pole. 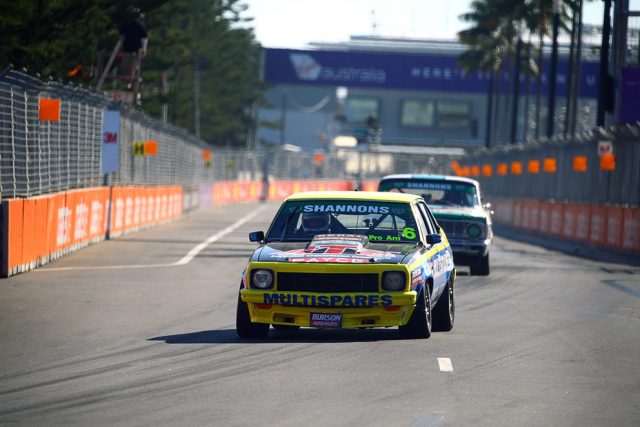 Ryan Hansford qualified on pole for the first of tomorrow’s two Touring Car Masters races around the streets of Newcastle.

The Torana driver, who is one of four drivers in title contention this weekend, headed a top three split by less than a tenth of a second.

In fourth starts Steve Johnson, ensuring all title contenders start on the first two rows of the grid.

The opening Touring Car Masters race of the weekend starts at 0850 tomorrow morning, before the season finale at 1345 AEDT. 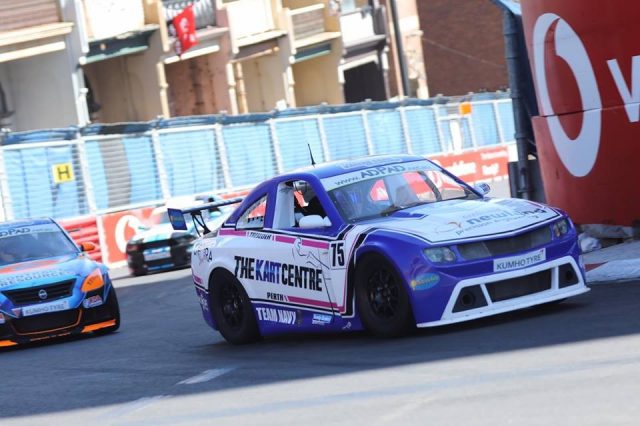 Treseder led the field away in Race 2 while Justin Ruggier passed James Duckworth for fourth at Nobbys Hairpin on the opening lap.

That became third when series leader Blake Sciberras slowed with a mechanical problem before a Safety Car for a stranded Joshua Anderson, who had been tagged by Leigh Bowler.

After the restart, Ruggier made a brave move past Joel Heinrich down Shortland Esplanade before setting after Treseder.

While he got close, Treseder’s superiority through the sequence of ninety-degree corners gave him enough margin to prevent a serious challenge.

Earlier, Treseder won a first ever race in Newcastle which did not feature a full green flag lap due to two Safety Cars.

Heinrich finished third and Duckworth fourth, leaving the latter best placed in the title reckoning with the final race of the year tomorrow at 1005.

Cameron Hill chalked up another two Toyota 86 racing Series victories after leading every lap of the opening two races of the weekend at Newcastle.

Hill dominated the opening race, which was marred by a ten-car crash on the final lap.

Contact in the pack battling at the back end of the top ten saw Zach Loscialpo and Liam McAdam tangle, a clash that ultimately blocked the circuit.

There was also a mid-race safety car when Ben Grice and John Iafolla came together at the exit of the first corner on the fifth lap.

The safety car was again called for, this time after an incident involving Declan Fraser and Graham Smith in an otherwise straightforward race.

The final Toyota 86 Racing Series race of the season at 0930 AEDT tomorrow morning.