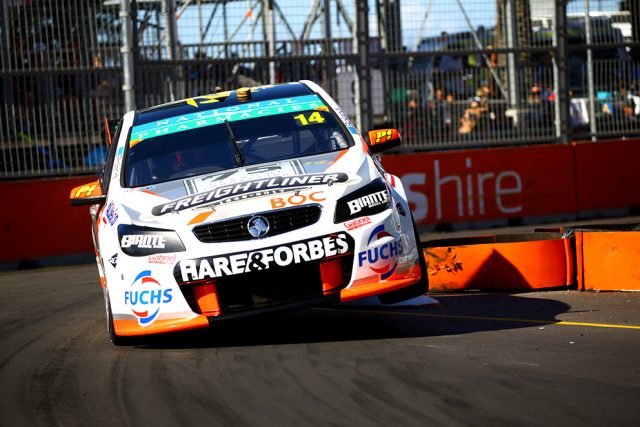 Tim Slade admitted he expected late-race drama as the opening race of the Coates Hire Newcastle 500 moved into its closing stages.

Having led 54 laps prior to his final stop, the Brad Jones Racing driver found himself embroiled in a battle with Shane van Gisbergen, Fabian Coulthard, David Reynolds and Simona de Silvestro late in the race.

Emerging from the pits on Lap 70, Slade found himself in the thick of the battle pack as they raced up Watt Street, before being shuffled back three spots as the pack reached Turn 2.

“I actually had no idea that that group of cars was around me, to be honest,” said Slade.

“I got told that we would be racing Pye on the exit, and I had no mirrors, and then I’m sort of up there going ‘I think someone’s on my right’.”

Slade dropped to an effective sixth in the skirmish, but worked his way back up to third at the chequered flag as those ahead struck trouble.

“I was a bit disappointed there but I knew there were lots of laps to go and obviously with Shane there I knew it was going to be pretty entraining and pretty sure **** was going to go down, so sort of sat there and capitalised.

“The car had pretty good speed and it’s awesome to get another podium.”

Debris offline made overtaking around the 2.65km Newcastle street circuit as debris made the tricky layout even more treacherous off the racing line.

“You really had to concentrate extra hard to make sure that you didn’t go a tiny bit off line,” said Slade.

“That was the trickiest part at the restarts because even though it didn’t feel like you went off line it built up on your tyres and it took a good lap to come off.

“I had a little moment there when I came up to Todd sort of down that fast Turn 5 I think it is – a bit hairy there for a while.

“It was definitely tricky, I think that makes passing even harder as well with all the marbles off line.”

Third place for Slade marked his second podium of the 2017 season, having recorded a third place in the Saturday race on the streets of Surfers Paradise.