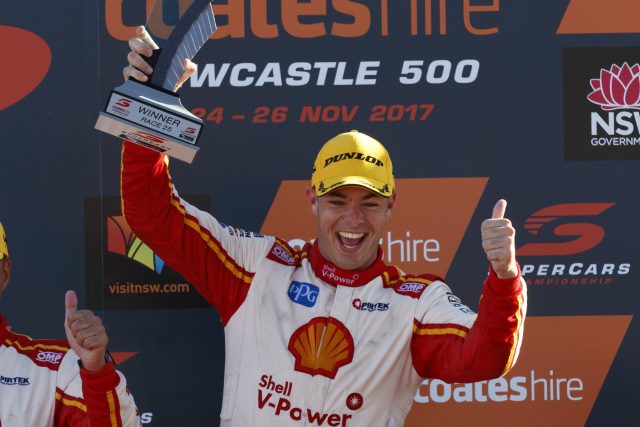 Scott McLaughlin is in the box seat to claim a maiden Supercars title after scoring victory in a dramatic Race 25 at Newcastle that severely dented Jamie Whincup’s title hopes.

The Shell V-Power Racing driver scored his eighth victory of the season to move into a 78 point series lead in what proved to be a pivotal race in the battle for this year’s championship.

Pole-sitter McLaughlin spent much of the race entrenched in the top five after dropping from the lead when the Safety Car was called on an opening lap that spelt disaster for Whincup.

Whincup, who held a 30 point lead ahead of the race, saw his hopes unravel when he and fourth-placed Michael Caruso came together at Turn 3.

The front right of Whincup’s Holden locked with the right rear of Caruso which broke the steering on the former.

Whincup also found the wall, damaging the right rear of his car in the process.

The six-time champion limped back to the pits and into the garage where he his team repaired the car to return him to the race in 24th spot, 13 laps down, before coming home in 21st spot.

McLaughlin stared at the back of a struggling Shane van Gisbergen (Red Bull Holden) for long periods before the final round of stops saw him move into a net second.

He then passed Erebus Motorsport’s David Reynolds to grab the lead, which he held to the flag, despite a late Safety Car caused by Garry Rogers Motorsport’s James Moffat.

The Kiwi needs only to finish 11th or better to clinch the title on Sunday.

“Long way to go, but yes! That was awesome I’m just so pumped,” said McLaughlin.

“Whatever happens tomorrow, we’ve given it our best shot and a team one, two for Shell V-Power Racing is as good as it gets.

“I really wanted it bad (the victory), got a really good start for once in my life and we were going okay, and then obviously the pit lane was tight in places. But to get the first race win after a full on one is awesome.”

The race produced a grandstand finish as the podium places changed in a matter of laps.

Reynolds was tagged by van Gisbergen, which earned the the latter a 15 second penalty, while the former dropped to fifth at the flag behind Lee Holdsworth, who made the most of a slick strategy.

As a result, Shell V-Power Racing’s Fabian Coulthard moved into second for a valuable team one-two, while Tim Slade completed the podium.

Slade, who started from 15th, had held the lead for large chunks of the race having elected not to pit under the first Safety Car, which put him in a clever off sequence two stop strategy.

The Brad Jones Racing driver rejoined the race in sixth after his final stop but a mixture of strong pace and incidents saw him climb up the order.

There was heartache for Simona de Silvestro late on as she appeared on course to finish fifth before drama struck on lap 78.

The Nissan Motorsport driver climbed into the top 10 after electing to pit on the second lap under the first Safety Car.

However, a maiden top 10 evaporated when she was caught up in a chain of events.

Van Gisbergen was tagged into a side by Coulthard at the hairpin which backed up the chasing pack and allowed Slade to dive underneath de Silvestro at Turn 12.

De Silvestro then ran wide and clouted the wall causing significant damage that resulted in a 20th position at the flag.

The race proved to be one of attrition as a multi-car crash at Turn 8, which included Dale Wood (Erebus Motorsport), Taz Douglas (Lucas Dumbrell Motorsport), Tim Blanchard (Brad Jones Racing) and Jason Bright (Prodrive) prompted a Safety Car on the opening lap.

The incident put Douglas and Bright out of the race.

Moffat also retired when he found the wall at Turn 2 late on, while local Aaren Russell damaged his Lucas Dumbrell Motorsport Holden following a hit at Turn 8 mid-way through the race.

Craig Lowndes also threw away a strong top 10 result when he found the wall at Turn 12, which resulted in terminal damage to his Triple Eight Holden.