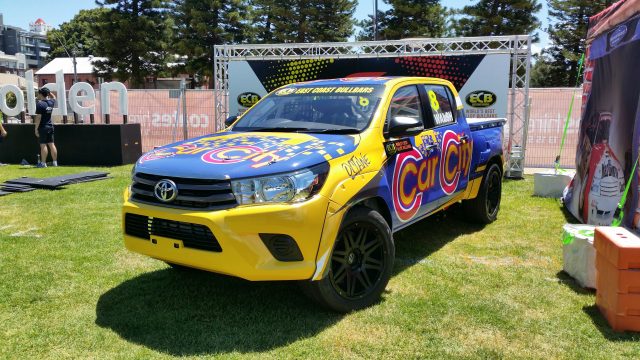 The calendar for the 2018 ECB SuperUtes Series has been finalised.

The series will then take in Winton, Townsville, Queensland Raceway, Sandown, Bathurst, the Gold Coast, and Newcastle.

The V8 Ute Racing Series visited six of those eight circuits this year, with Adelaide and Sandown the exceptions.

“Ute racing has been a huge part of the Australian motorsport for such a long time and we see this as the next phase for what has been an incredibly popular category,” said Supercars Managing Director Matt Braid.

“Since we launched the first SuperUtes in Townsville in July we’ve been inundated with interest in the development of this series.”

Meanwhile, Ben Walsh has confirmed previous reports in Speedcafe.com that he will drive one of the Western Sydney Motorsport Hiluxes in next year’s SuperUtes Series. 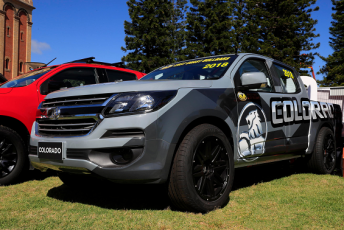 The Holden Colorado in Newcastle

His Toyota and the first completed Holden Colorado SuperUte are on display at the Coates Hire Newcastle 500 this weekend.

Jonathan Bloxsom, who made his motorsport debut this year in the ex-Luke Spalding V8 Ute, has also declared that he is likely to join the field next year in a Colorado.

“I’m ready to roll, go and buy one, and get it all ready to go,” Bloxsom told Speedcafe.com.

“It sounds like that’s happened and I’m just waiting to get a bit more clarification around it, and a bit of feedback from Holden because Holden talked about looking after us with one of their cars.

Bloxsom’s entry would be additional to the 14 which are already expected to take to the grid in 2018.