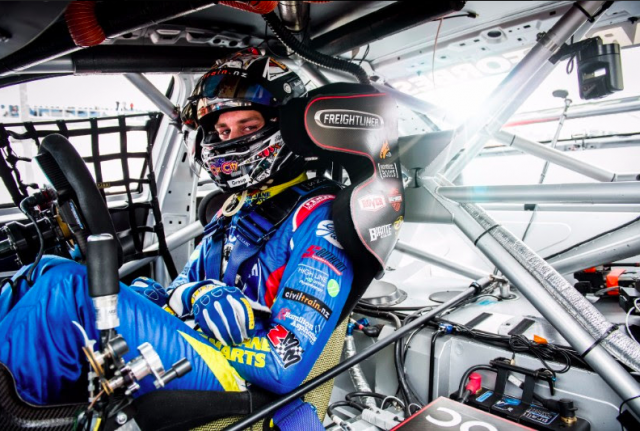 Andre Heimgartner is in the frame to secure a full-time Supercars return next season, Speedcafe.com has learned.

The New Zealander is in line to land the vacant drive at Nissan Motorsport following confirmation of Todd Kelly’s retirement from full-time racing this week.

It appears Heimgartner has put himself back in the Supercars mix following a stellar Pirtek Enduro Cup alongside Tim Slade and a strong Porsche Carrera Cup campaign that saw him finish as runner-up.

Brad Jones Racing drafted in Heimgartner as a co-driver replacement for the injured Ash Walsh, where he starred at Bathurst and the Gold Coast.

The 22-year-old made his full-time Supercars debut in 2015 with Super Black Racing before joining Lucas Dumbrell Motorsport last year, where he finished 25th in the standings.

Heimgartner neither confirmed nor denied the switch to Nissan when contacted by Speedcafe.com, but admitted that he was back in the frame for a full-time return.

Nissan Motorsport is expected to officially unveil the identity of its new recruit next week.

“There are a few deals floating around and if things can come together then I would love to return to the Supercars field,” Heimgartner told Speedcafe.com.

“It is interesting obviously the Gold Coast race has put me back on the map and raised my stakes a bit more.

“Having a good year in Carrera Cup has allowed me to rebuild my reputation after my first year of Supercars and last year which was a bumpy ride.

“I’ve got to the stage now there teams are offering and wanting me to drive for them.

“We are definitely on the look out for deals and you never know I might be on the grid next year.”

With Heimgartner understood to be set to join Nissan, it appears Jack Le Brocq is now favourite to join Tekno Autosports having previously been linked to the drive at the Kelly run team.

As previously reported, a seat has opened up at Tekno following the news that Will Davison is set to link up with the new 23Red Racing, born out of LDM.