Paul Dumbrell has handed Todd Hazelwood a significant leg-up in the Dunlop Super2 Series title battle after crashing out of qualifying in Newcastle.

Dumbrell, who had failed to pull up the #88 Eggleston Motorsport VF Commodore at Turn 1 on multiple occasions during Friday practice, locked up and slid into the tyre wall early in the session.

While the series leader drove away from the scene, the red flags were still flown, meaning that Dumbrell lost his best lap time and took no further part in the session.

Having toured the run-off at the top of Watt Street on his first flying lap, Dumbrell’s penalty locked him into last position on the 22-car grid.

“I just had a few issues with rear locking and it just caught me out there,” Dumbrell explained.

“In hindsight I should have gone down the escape road and just come back and put a green tyre on but I didn’t. 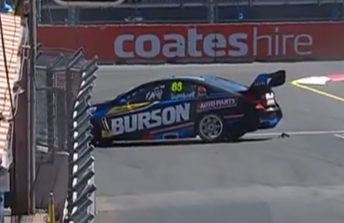 “It’s the same for everyone, I’ve just done a bad job today.”

Bathurst 250 winner Macauley Jones (#14 Brad Jones Racing VF Commodore) had sat atop the timesheets when the session was neutralised in the sixth of 15 minutes.

Anton de Pasquale and then Dumbrell’s team-mate Will Brown went faster upon the restart, the latter of whom also run off at Turn 1 immediately after.

Hazelwood then went and laid down a 1:11.1469s which proved to be good enough for Armor All Pole Position.

Jack Le Brocq (#28 MW Motorsport Altima) came closest, but couldn’t piece together a whole lap which left him less than a tenth of a second short and starting on the outside of the front row.

Garry Jacobson (#1 Prodrive Racing Australia FGX Falcon), who nearly became involved in Dumbrell’s error himself, briefly held second late in the session but was bumped back a spot by Le Brocq.

Brown (#38 VF Commodore) will join him on the second row, with MW Motorsport team-mates Bryce Fullwood (#16 Altima) and Shae Davies (#26 Altima) off Row 3.

With Hazelwood trailing Dumbrell by 49 points, a win for the South Australian native would move him into the series lead if Dumbrell finishes worse than sixth.