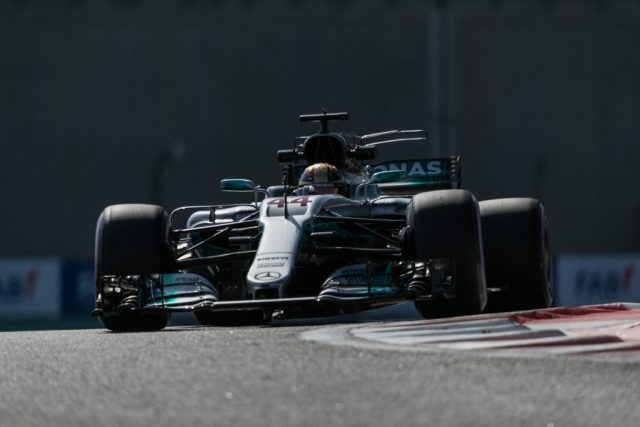 The Mercedes driver managed a best of 1:37.877s, pipping the Ferrari of Vettel by 0.149s with Daniel Ricciardo third fastest.

Hamilton, who was second fastest in first practice, set the early benchmark with a 1:39.720s, with Ricciardo just 0.040s off in second.

The Briton continued with that run and improved again, with a 1m38.912s, to move 0.848s clear of Ricciardo as the sun set at Yas Marina.

Valtteri Bottas was the first driver to complete a qualifying simulation, clocking a 1:38.609s to go quickest in his Mercedes.

The Finn was usurped by Vettel before Hamilton became the first and only man to dip into the 1:37s.

With just over 40 minutes to go, attention turned to long-run data gathering, with Bottas and Hamilton focusing on the ultra-softs.

Hamilton then joined Vettel on running the super-softs for the final part of the 90-minute session, which provided conditions that would be similar to those in the race.

Ferrari’s Kimi Raikkonen was fourth quickest, 0.475s off the pace, with Bottas two tenths further back in fifth.

Red Bull’s Max Verstappen was a second off the pace in seventh and 0.7s slower than team-mate Ricciardo.

Force India duo Sergio Perez and Esteban Ocon, who were separated by just 0.010s, were seventh and eighth respectively.

Romain Grosjean spent most of the session in the garage as his Haas team worked on fixing an electrical problem, and completed just 12 laps.