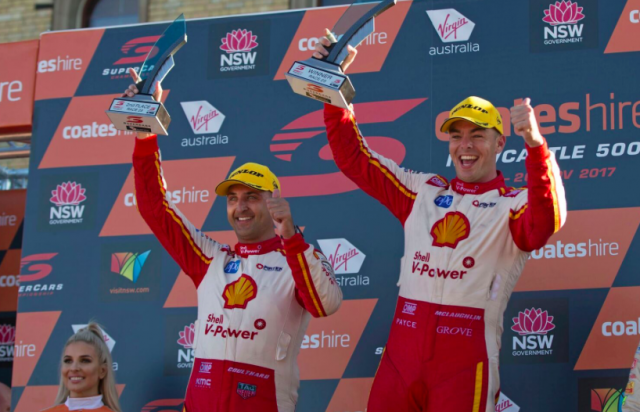 Scott McLaughlin and Fabian Coulthard’s 1-2 result in the opening race at the Coates Hire Newcastle 500 saw the DJR Team Penske squad wrap up the 2017 teams’ championship.

The squad holds an unassailable 294-point advantage heading into Sunday’s season finale, in which it could add a maiden drivers’ championship for McLaughlin.

“Look I’m stoked for the team, the teams’ championship is big, that’s what we wanted,” said McLaughlin.

“For me that’s almost a bigger relief to just have that sorted now we need to just move on and maybe tick one more goal.

“I was thinking along the way this will be close to wrapping the team’s up after obviously Triple Eight’s dramas, so amazing day for me.”

McLaughlin moved into the lead of the race following the final round of pit stops, heading home Coulthard who battled back to second after finding himself double-stacked twice during the 91-lap encounter.

“We got double stacked twice at both of those pitstops so it was a hard day but to come through and have a 1-2 for the team, (Tim Cndri), (Roger Penske), everyone in town, it’s pretty cool,” said Coulthard.

“For us, we’re still trying to get 1-2 in the championship. Obviously, we’ve sealed the team’s championship which is fantastic.”

Triple Eight team manager Mark Dutton was among the first to offer his congratulations.

“They have done a good job,” Dutton told Speedcafe.com.

“We were fighting for it and we obviously wanted to win it but they have done a cracker job all year so they deserve it.”

Victory for DJR Team Penske in the teams’ championship marks the first time since 2009 that Triple Eight hasn’t won the title, and moves the Ford team into the coveted first garage in pit lane for 2018.

The team could add the drivers’ championship to its honour roll tomorrow, with McLaughlin holding a 78 point advantage over Jamie Whincup.