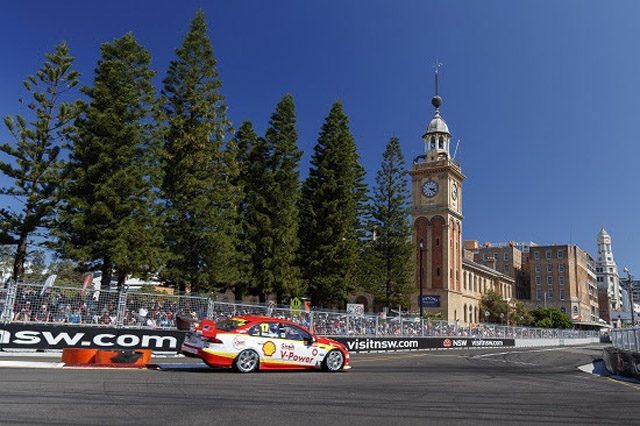 Whincup topped the morning’s practice session before McLaughlin set the fastest time of the day to hold the upper hand at the end of the Friday’s proceedings.

Both were left impressed by the 2.6km layout around Newcastle’s East End, drawing comparisons with Surfers Paradise.

“You’re not even near top gear, just a short little crazy street circuit; Gold Coast on steroids, in a way,” said Whincup.

“The best part of the track is the last couple of corners coming down the hill over those big roller coasters into that second last corner. That’s a favourite for me.”

“It’s mad. It’s awesome, exactly what we thought it was probably going to be, and probably a bit more. A lot of character and pretty speedy in parts,” added McLaughlin.

“It’s so technical. You’ve got to try and work out one corner, you’re sacrificing one corner to help you regain in three corners’ time,” he continued.

“It’s really bumpy too in places. It has everything a driver wants and it’s so good to be here.”

While enjoying the challenge the circuit presents on a technical level, there are concerns that passing will prove difficult.

Drivers have dismissed Turn 2 as an overtaking opportunity, the uphill approach and short braking zone making any move high risk, while the narrow approach to Turn 1 also makes passing difficult.

It leaves just the hairpin towards the end of the lap as the only realistic overtaking opportunity, leaving some to suggest qualifying will prove even more important than usual.

“Very important because it’s so tight and twisty, there’s not a huge amount of passing opportunity,” reasoned Whincup when asked how crucial qualifying could prove.

“Qualifying somewhere up the front is going to be well and truly important.

“(It’s) going to be intense, but 95 laps, we’re going to be well spent by the end of Sunday afternoon.”

With no further practice sessions scheduled, drivers will head straight into qualifying at 1100 AEDT tomorrow morning, setting the grid for the penultimate Virgin Australia Supercars Championship race of the season, with Whincup and McLaughlin split by just 30 points.