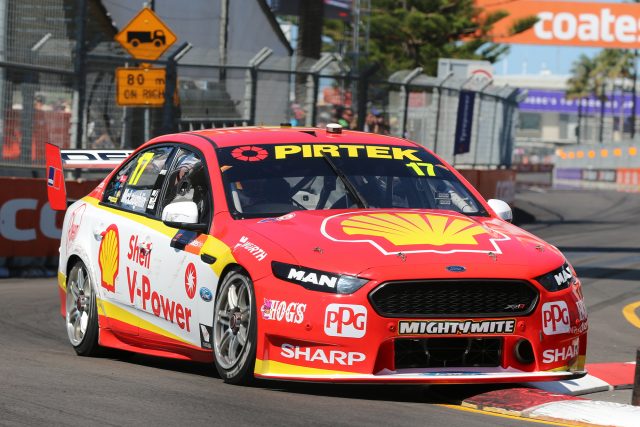 Scott McLaughlin clocked the fastest lap time of the day as he blitzed the second and final practice session of the inaugural Coates Hire Newcastle 500.

The championship contender was the only driver to break into the 1:09s as he ended the 40 minute session with a comfortable 0.4s margin over championship leader and Practice 1 pacesetter Jamie Whincup.

McLaughlin moved to the top of the times with a 1:09.89s effort before improving on the benchmark twice, resulting in a 1:09.59s lap.

Whincup was unable to match his championship rival, leaving him adrift of the Shell Ford at the chequered flag.

“It’s Friday. I wish it was bloody Saturday or whatever,” said McLaughlin.

“The car is really nice. It wasn’t bad in the first one (practice) but it wasn’t anywhere like it is now, Ludo (Lacroix)’s really tuned it up for me and listened to what I wanted, and it’s exactly what I needed.

“We’d saved (tyres), throughout the year, we’ve saved for this round just to have tyres in the bank knowing it was a new track.

“At the moment the car’s really nice and to be able to throw tyres at it is a luxury. But on the race run it was really nice too, so that’s good.”

Competing in what is set to be his final Supercars event, Todd Kelly claimed third in the #7 Nissan Altima, while Scott Pye (Mobil 1 HSV Racing) continued his impressive run at the Newcastle street circuit to finish fourth.

“The car was pretty good and I didn’t get that many laps in that first practice so we were a little bit behind, so I’m a little bit surprised at the time. But the car did what I wanted it to, and there it is,” said Todd Kelly.

“I’m blown away. I honestly didn’t expect this event to be so big.

“Looking out here at all the waterway and all the huge boats and stuff, and us on the other side in pit lane, and the track’s just amazing. The guys have done an amazing job setting the whole place up, it’s brilliant.”

“We haven’t been able to put our finger on it yet.

“We’ll tear it down now and have a quick analysis to see if that is the case or see if (it is) the changing grip conditions. We couldn’t find anything wrong during the session.

(It) just feels like a different car. Just doesn’t turn properly, he got in and straight away said it’s not the same car he had in P1.”

Supercars will return for Armor All Qualifying on Saturday at 1100 local time which will set the grid for the penultimate race of the season.