Drivers pay tribute to V8 Utes ahead of finale

Drivers pay tribute to V8 Utes ahead of finale 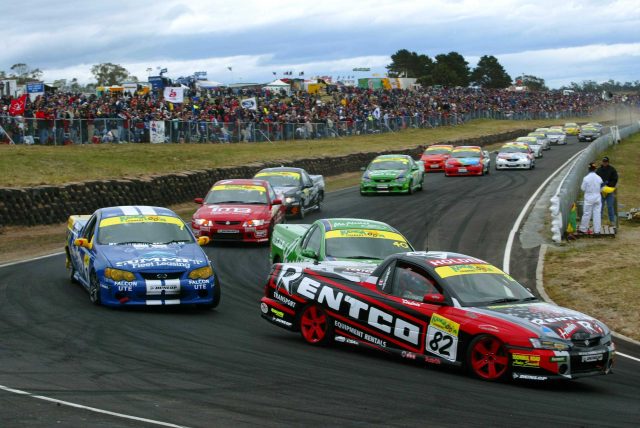 This weekend marks the final ever V8 Ute Racing Series round

Drivers past and present have paid tribute to the V8 Ute Racing Series before the category comes to an end in its current guise in Newcastle this weekend.

The Coates Hire Newcastle 500 marks the final event for the Commodore versus Falcon formula which has underpinned the popular support category for 17 years, with the turbo-diesel dual cab SuperUtes Series taking its place next year.

The series kicked off in 2001 at the Adelaide 500 with a field of nine cars but quickly grew to a full-subscribed 32-car grid, entertaining fans with a rough-and-tumble style of racing and big characters underpinned by the adoption of a nickname by every driver.

“At that stage, Ford and Holden had just released the XR8 and the SS so they were as much two-door sporting coupes as they were work utes,” Denyer recounted to Speedcafe.com.

“That kind of gave the whole utility market a decent shot in the arm and we thought, ‘Well, what a great chance to start a new racing category.’

“It was originally built to be an entertainment category, which it was, and I always positioned the category as the clown act at the circus before the main trapeze act came on, and that was a role we played with V8 Supercars.

“I think it needed to change and mature along the way to sustain itself but it was still very entertaining because the racing was so good.

“I think it also became a genuine feeder category to give guys an opportunity to move through and do something different.”

Ironically, the best exponent of V8 Utes as a feeder category is arguably Warren Luff, who won the series back-to-back in its most carnage-filled days.

Luff, who went on to drive full-time in Supercars and has since been a highly sought-after co-driver, said that V8 Utes was a critical part of his rise through the ranks.

“I loved my time in the series; for me it was definitely a fantastic grounding,” he told Speedcafe.com.

“That’s what got me my break in V8 Supercars because in 2002 when I got the enduro drive at Lansvale Racing with Cameron McConville, it was actually my results in the Utes series that year that prompted Trevor Ashby and Steve Reed to give me a test.

“It’s sort of sad to see the end of an era this weekend.”

Current title-holder David Sieders and Sieders Racing Team have been among the strongest supporters of the SuperUtes concept.

Despite the positivity about the new direction, Sieders says that this weekend will be tinged with sadness at the departure of the two-door V8s.

“What we do with our utes that are essentially a work vehicle and to go have fun with them on a race track is pretty cool.

Wade Aunger become the voice of V8 Utes during his long spell as the circuit commentator, as well as also leading the television call during the earlier years.

Aunger, who himself became a significant part of the entertainment package, spoke glowingly of the spectacle of V8 Utes and the enjoyment he derived being involved with the category.

“It was a very, very, very important part of the Supercar package, probably more important than people even in the administration of Supercars understood,” he told Speedcafe.com.

“It was regarded as the clowns of the circus to a large degree but it was the most entertaining, unpredictable aspect of any event that we showed up at.

“It was larger than life personalities and my instruction from my boss Craig Denyer was always that it was entertainment before motor racing, so the whole idea was quite revolutionary in how it was presented and with all the nicknames and things like that.

“The great part was that there was no political correctness with it; we were just able to have as much fun as was possible (on television), and so many drivers came to me that became ute drivers later and said that they just thought, ‘I’ve got to be part of that.’

“It was a phenomenal era and full credit to Craig Denyer because it was his brainchild along with Ross Palmer.

“Those early PROCAR days were really heady days too when we used to have ute musters; down in Tassie was huge and so was Queensland Raceway when we had a massive back straight ute muster.

“There were so many great characters and it was just a really wonderful time in my life.”

Ryal Harris, three-time series winner with a high probability of adding a fourth this weekend, says that he will miss the challenge of the heavily production-derived V8 Utes, compared to the more race car-like SuperUtes.

“The way the cars handle, they’re a nightmare to drive, because they’ve got the brake booster so you’ve got to be real light on the brakes and the tyres go off and they’re actually really, really hard to drive on the limit.

“That’s probably what I’ll miss the most, just the challenge of driving them.”

The last ever round of the V8 Utes Racing Series with a single practice session from 1015 local time/AEDT on Friday, with three races across the Saturday and Sunday.

CLICK HERE to relive the V8 Utes era in images.