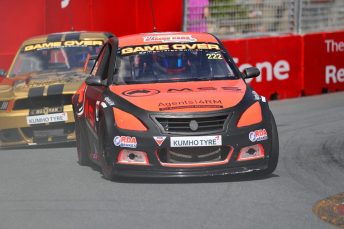 O’Keefe on the Gold Coast prior to the accident pic: Digital Realism

Scott O’Keefe will not feature in the Aussie Racing Cars field in Newcastle as he recovers from a torn kidney after a major crash on the Gold Coast.

O’Keefe came to grief in heavy rain during Race 2 of the weekend, spinning on the main straight before being collected by Matthew McKittrick.

While he extricated himself from his car, O’Keefe spent four nights in the Gold Coast University Hospital after medical checks revealed the extent of his injuries.

The 35-year-old is upbeat about the recovery process but did not receive clearance to race on the support card at this weekend’s Coates Hire Newcastle 500.

“I did a Grade 2 laceration of the kidney from the impact of it, so I had a bit of internal bleeding for the first couple of days and they were waiting for that to go away,” O’Keefe told Speedcafe.com.

“Not only did I do that, I bruised and tore all the cartilages in my right side ribs, hurt my shoulder, hurt my arm, and mainly bruising everywhere else.

“I had another scan (but) they wouldn’t give me the ‘okay’ to race in Newcastle, and I’ve still got a lot of pain; I wouldn’t have felt comfortable racing anyway.

“It was a lot worse than I thought. I got out of the car and at no point did I think I was going to be admitted to hospital and stay in there four days.”

O’Keefe, who also noted that McKittrick has called several times to check on his health since the incident, declared that he would be ready for next year’s season.

Meanwhile, Newcastle driver Charlotte Poynting will enjoy a special honour when she is the first car to ever enter the Newcastle East Street Circuit in a formal session.

With Aussie Racing Cars first on track for practice on Friday morning, series management took an online vote to decide who should lead the field onto the brand new race track.

The initiative, which raised $1,099 for Ronald McDonald House with the series donating a dollar for each vote, will make for an extra special weekend for Poynting.

“It’s going to be amazing,” she told Speedcafe.com.

“It’s really cool even that I’m getting a home race but getting to be the first person ever on the track and being able to hold that and make history forever is going to be something really cool.”

Poynting, whose Aussie Racing Car runs a “NEWYGRL” ‘numberplate’, works at a hotel just beyond the Turn 1 run-off and has already sampled the race track prior to this weekend.

“I’ve only been able to do little bits at a time, I haven’t been able to get in a full lap all at once yet, but when I finish work at midnight I always go in and cut a few laps – at the speed limit of course.

A season-high 34-car field, including the return of series founder Phil Ward, is set to take to the track from 0840 local time/AEDT on Friday morning.