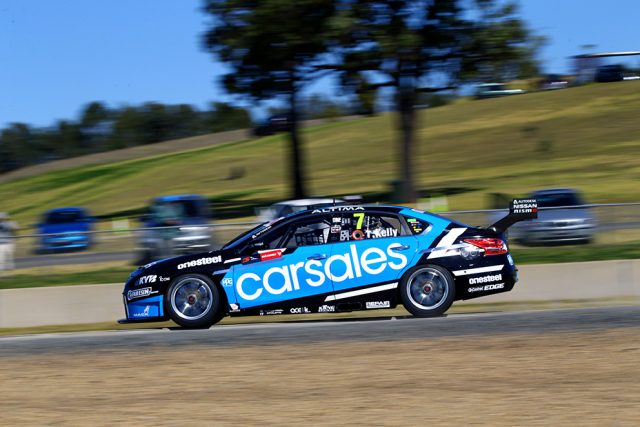 Todd Kelly believes that this weekend’s Coates Hire Newcastle 500 will be his last ever event behind the wheel of a Supercar as he prepares to hang up the helmet as a full-time driver.

The question of continuing as an enduro co-driver was left open when Kelly made the announcement that he would be bringing an end to his 20-year career in the Virgin Australia Supercars Championship.

However, he has since said that his ailing right knee will likely prevent him from suiting up again for Sandown, Bathurst, and the Gold Coast.

Kelly will seek to continue to get his competitive fix in water skiing, but admitted that his time as a race car driver is likely to be completely up.

“I really don’t want to stop car racing and water ski racing all at once,” the 38-year-old told Speedcafe.com.

“It’s just that racing and competition. I’ve competed since I was nine.

“Preparing yourself and trying to beat somebody and race somebody is what I do, whether it’s skiing and digging deep when your legs are burning and you’re running out of steam and you’re doing nearly a hundred mile an hour; just to compete is part of me.

“At the moment as far as the enduros go, I personally saw this weekend as my last weekend in a race car.

“(Brother/team-mate) Rick and Mum and Dad and the team are all pretty keen on me doing the enduros but at the moment that’s not part of my plan.

“I sort of saw this as the last race, but I don’t know what it’s going to feel like not to be a driver, I’ve never been in that position.

“I might get to Clipsal and the Grand Prix and go, ‘No, I’ve got to get back in a car,’ or I might go, ‘This is okay,’ so until I get to that point I’m not going to really know but right now I don’t have any plans on jumping back in.”

Kelly also revealed the full extent of the knee injury which he has battled with in 2017.

He says that the effort of managing Nissan Motorsport, which he and Rick own and run, was a significant factor in his decision, but described his ongoing physical ailments as “the straw that broke the camel’s back.”

“The workload of the team is pretty significant and that’s always been a good challenge to manage as well as being a driver,” he noted.

“To be able to allow enough of my capacity to focus on that has been a challenge.

“Then (there was) the physical side when I was struggling to actually drive the car; I just sat there mid-year and went, ‘I just can’t keep doing this; now this is too much.’

“I’ve struggled through quite a few rounds and the enduros were pretty difficult when we started having to do driver changes and the number one mechanic was basically lifting me in and out of the car until Sandown.”

While his replacement in the #7 Nissan Altima is yet to be announced, Kelly confirmed that he will be a young, up-and-comer.

He also explained that the calibre of the driver which the team has signed helped him to make the decision to end his own career.

“You can’t keep going through that so I thought kind of mid-year, ‘Something’s going to have to give here.’

“Then we started working on solutions and got to the point where I was comfortable with the outcome as far as another driver and that’s where I could draw a line in the sand and go ‘Right, I’m able to jump out.’

“There are two parts; there’s one me knowing I can’t keep doing it at the level I want, but two there’s me being content that who hops in my car is going to do as good or better job and has got the potential to be the right driver for the team.

“I wouldn’t want to have hopped out and just thrown anyone in there to get me out of it; I would have dug deep and tried to go again if I didn’t think we could get a good solution.

“It was only recently we got to that point in the last few weeks and that was when it sunk in, ‘Right, this is happening after 20 years, I’m jumping out of the car.’”