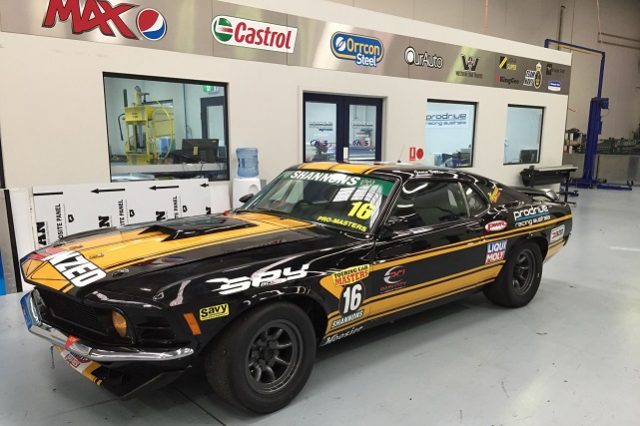 Two-time Touring Car Masters winner Gavin Bullas will make his return to the series this weekend at the Coates Hire Newcastle 500.

Bullas has not raced since a part-campaign in TCM in 2015 due to business interests, but will bring back his 1970 Boss Mustang after a thorough working-over of the car.

“(Category Manager) Tony Hunter has been hounding me for some time to come back and have a crack,” said Bullas.

“For a very long time we didn’t have the car right – it had a constant vibration that we couldn’t find.

“It was major work to find it, but we went right through the car and found the issue and fixed it – and it’s been really good since.

“We went and did some testing at Winton and I was really happy with how it went.”

Bowe leads the series, which is set to go down to the wire this weekend with just a five-point gap between he and Steven Johnson in the outright and ProMasters standings.

Adam Bressington is only 20 points further back on the outright table.

Meanwhile, Cameron Mason will be the local hope in Newcastle in his 1966 Mustang Fastback, and is thrilled to have the chance to race in his home city.

“It’s hard to believe it’s a reality,” he said.

“It was such an ambitious undertaking and it seems the organisers have executed perfectly.

“The buzz around town for the event is huge – it really feels like it has the potential to be one of the major event stops of the year.

“It’s going to be quite an iconic circuit and things like the view from Fort Scratchley, the Monaco-style big boat mooring in the harbour, and the concerts.”

There will be two debutants in the 27-car field, namely Jamie Tilley, who is the son and nephew of fellow TCM drivers Brad and Cameron respectively, and Jim Pollicina.

Both of Matt Stone Racing’s Toranas will also take to the brand new circuit after rebuilds since accidents at Sandown and Bathurst.

TCM will hold two races in Newcastle, both on the Sunday, with their first practice session on the morning of Friday 24 November.