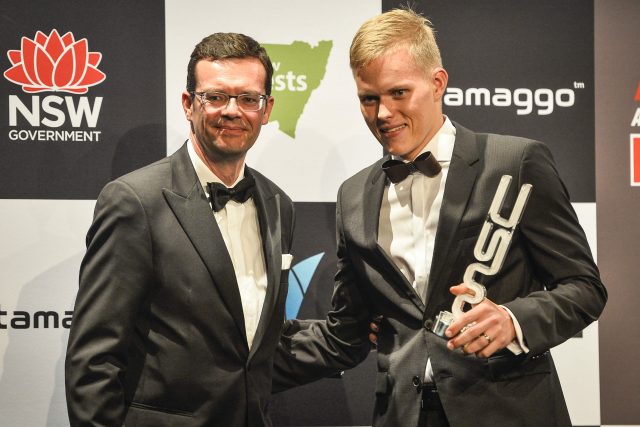 Ott Tanak with his award

Ott Tänak carried off the top accolade at the WRC Gala awards in Sydney tonight as his M-Sport team took a clean sweep of the major honours.

The Estonian was voted WRC Driver of the Year for a second consecutive season by fans on the FIA World Rally Championship’s official wrc.com website.

His co-driver and fellow countryman, Martin Järveoja, was named WRC Co-driver of the Year following an impressive debut WRC season with Tänak. 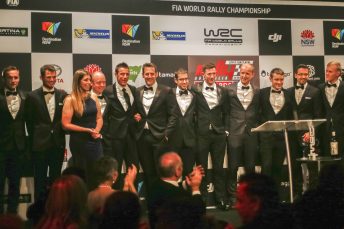 The private Ford M-Sport World Rally Team, which toppled three of the world’s biggest car companies to win the drivers’ crown with Sébastien Ogier and a first manufacturers’ title for a decade, was named Team of the Year.

Almost 250 guests, including drivers and co-drivers, team bosses and championship officials, celebrated the most exciting and unpredictable season in a decade.

They were joined by city dignitaries, including New South Wales premier Gladys Berejiklian, for the star-studded evening at the Museum of Contemporary Art, overlooking the Opera House and in the shadow of the Harbour Bridge.

M-Sport and Tänak shared another success when his Fiesta’s colour scheme wowed fans to win the WRC 7 Livery of the Year Award.

Thierry Neuville, who clinched the runner-up position in the championship at the final round Kennards Hire Rally Australia 24 hours earlier, was another multi-award winner.

The Belgian lifted two trophies, including the Certina Timing Feat Award for hurtling his Hyundai i20 down the famous El Condor mountain to claim a dramatic YPF Rally Argentina victory by 0.7sec – the third closest in WRC history.

Kris Meeke’s remarkable Mexico victory, when he crashed into a car park just 750 metres from the finish of the final live TV Power Stage before regaining the road to win, scored the Michelin Magic Moment award.

Esapekka Lappi’s high-flying leap over the famous Fafe jump in Portugal on his World Rally Car debut earned him the OneBet Jump of the Year.

Despite a tough year, New Zealand’s Hayden Paddon took the WRC.com Social Media Star of the Year for his dedication to engaging his fans and massive following.

The 2018 season begins with the traditional opener, the Rallye Monte-Carlo on 25 – 28 January, with another 12 events making up the season which will again culminate in Coffs Harbour 15-18 November.