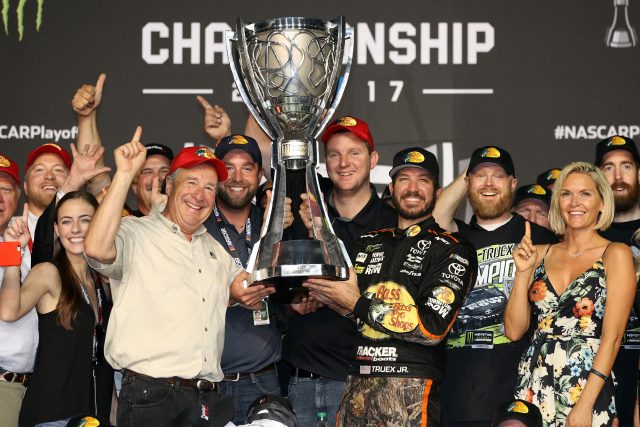 The Furniture Row Racing team, including Peter Craik on the very right of the shot

Craik is an engineer on Truex Jr’s #78 Toyota, which the 37-year-old drove to victory in the season-ending Ford EcoBoost 400 at Homestead-Miami Speedway, a race which finished as a head-to-head battle between he and fellow Championship 4 contender Kyle Busch.

Known as ‘Killer’, Craik joined the team in 2015 from Andretti Autosport’s IndyCar program, having previously worked for Britek Motorsport and Kelly Racing in Supercars.

The Brisbanite says that Truex Jr’s series win is a reward for the team’s effort after the #78 crew was the class of the field in 2017, taking a season-high eight race wins.

The triumph came amid a year of off-track hardship for Furniture Row Racing, mostly recently team owner Barney Visser’s heart attack and bypass surgery a fortnight ago which left him unable to attend. 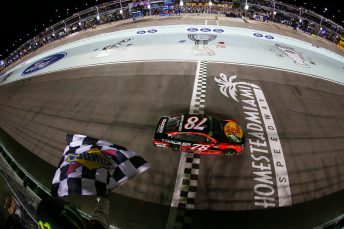 “We’re having a few beers right now out the back of the truck, so it’s been a good night for us,” Craik told Speedcafe.com from Homestead-Miami Speedway.

“Obviously we had the most emotions of anyone all season so it was really kind of fitting that we ended up winning the race and winning the championship.

“We think we were the fastest car all season and we ended up winning the championship so it was probably a relief for (NASCAR) as well given the points system and the way the play-offs work.

“Everyone’s really happy, we’re proud of what we’ve done, and it was really nice to cap off the season with the championship.”

Craik also played down the impact of being one of NASCAR’s smaller teams, instead paying tribute to the workshop and road crew which work on the #78 Toyota housed in Denver.

“We’re smaller (but) we’re still a two-car team, going back to one car next year, but we’ve still got a bunch of guys,” Craik said.

“We’re a customer of Joe Gibbs Racing, that’s true, and we work closely with those guys but we’re out on our own really in Denver.

“There’s guys who have been at the shop since day one, so it was really a kind of a build-up from early 2015 when the new road crew was put together and we’ve started to work on new ways to do things and that sort of thing, so it’s paid off after three years of hard work.”

Craik is not the first Australian to make his mark in NASCAR this year, with James Small filling in as crew chief on the team’s sister car earlier this year.