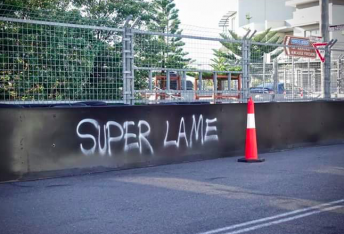 Vandals have targeted the Coates Hire Newcastle 500 street circuit prior to next week’s Supercars season finale.

Reports have suggested poison was used to inscribe the words “super corrupt’ on the grass at the circuit’s paddock area at Foreshore Park.

Meanwhile, anti-Supercars graffiti has been daubed on the circuit’s crash barriers as the event prepares to host its inaugural Supercars race from November 24-26.

The event has faced unrest from a minority of Newcastle residents ever since the championship announced it had signed a five-year deal to host its season finale at the New South Wales city.

Supercars has worked to allay residents’ fears throughout the process of constructing the circuit and infrastructure, which began in May.

“The overwhelming community support, reflected in massive ticket sales and the huge local interest, will do the talking in less than a week’s time. Newcastle has and will vote with its feet,” read a statement from Supercars issued to Speedcafe.com in response to the vandalism.

CLICK HERE to view a virtual lap of the Newcastle street circuit.