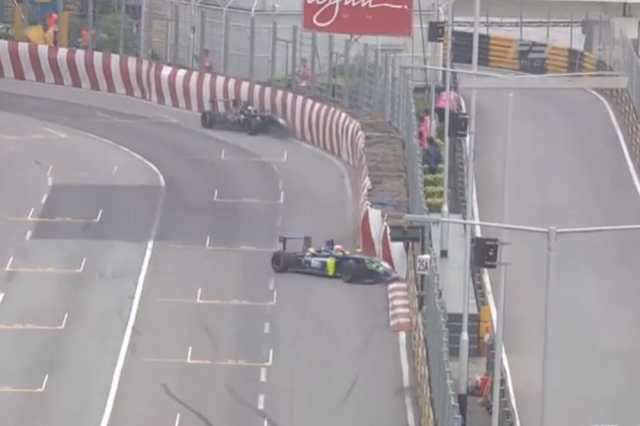 Daniel Ticktum has won the Macau Grand Prix in a grandstand finish after the top two crashed at the very last corner.

Sergio Sette Camara (Motopark) held the lead on the final lap but was under intense pressure from Ferdinand Habsburg (Carlin).

Habsburg attempted to round up Sette Camara at the R Bend on the 15th and final lap and while he succeeded in doing so, he carried too much speed and careered into the wall on exit.

Sette Camara, too, lost control and suffered the same fate just metres behind.

That incident left Ticktum (Motopark) with free passage to take victory, rewarding the Briton for a bold move on the second-last lap.

Ticktum elevated himself from fifth to third when he slipstreamed past both Maximilian Gunther (Prema) and Lando Norris (Carlin) in one fell swoop between Mandarin and Lisboa.

Norris and Ralf Aron (Van Amersfoort Racing), who ran at the rear of the four-car battle which had been raging when Ticktum made his move, rounded out the podium.

Habsburg managed to drag his car across the finish line in fourth.

The top two of the early part of the race also took themselves out on Lap 3, with leader Joel Eriksson (Motopark) and pole-sitter Callum Ilott (Prema) coming together between Mandarin and Lisboa.