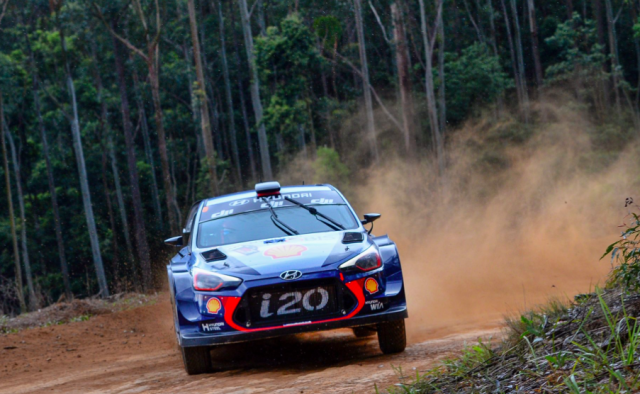 Thierry Neuville closed out the WRC season by taking a comfortable victory at Kennards Hire Rally Australia as drama struck Jari-Matti Latvala on the final stage at Coffs Harbour.

The factory Hyundai claimed his fourth win of the season with a 22.5s margin over M-Sport’s Ott Tanak after Toyota’s Latvala surrendered second spot when he came to grief on the Wedding Bells stage.

Latvala’s mistake, which delayed the stage briefly, promoted New Zealand’s Hayden Paddon to third, for his second podium of the season for Hyundai.

The event belonged to Neuville who assumed the lead of the rally on the Saturday after team-mate and opening day leader Andreas Mikkelsen retired following a double puncture.

The Belgian held a 20.1s lead into the final day but that was halved by Latvala when torrential rain hit the morning loop of stages.

Conditions forced organisers to cancel Stage 20, a rerun of the earlier Pilbara test.

However, Neuville recovered some of his advantage as conditions improved with a victory on Stage 19, before completing the win with a run through Wedding Bells Power Stage under clear skies.

“This one is a special one, this one goes to the whole team,” said Neuville, who also secured the runners-up position in the championship.

“They’ve worked so much during the whole season. It wasn’t always easy, but we kept the motivation high and pushed hard even if we lost the championship.

“Now we secure another win and second place in the championship. Thanks to the whole team.”

Tanak headed into the rally in contention for the runners-up spot but the M-Sport driver struggled for outright pace early in the event.

However, the Estonian moved into the podium places after the demise of Mikkelsen and Citroen’s Kris Meeke on Saturday.

Paddon, who faces a part-time campaign with Hyundai next season, believes he can take some confidence from the result.

“It is obviously unfortunate for Jari-Matti and it is not the way we want to get a podium,” said Paddon, who started the day in fifth spot.

“It hasn’t really been a great podium for us but to pick up a podium is certainly a huge surprise and nice after the year we have had.

“I’m pretty critical of myself and we have been missing speed at the moment, but I think we have found something and it gives us some confidence.”

Newly crowned five-time world champion Sebastien Ogier came home in fourth after an eventful final round of the season.

The Frenchman was forced to sweep the roads on the opening day and battle a gearshift issue, which saw him lose 48 seconds.

He then copped a 60s penalty today after checking into a stage early.

After winning the final stage from Tanak, Ogier remained coy on his plans for next season with a deal yet to be secured.

“I can only say that that was my last stage for 2017,” said Ogier, when asked if the stage was his last in the WRC.

Elfyn Evans brought his M-Sport Ford Fiesta back to Coffs Harbour in fifth ahead of Toyota’s Esapekka Lappi.

Citroen’s Meeke was classified in seventh after he returned to the rally following contact with a bridge that damaged his rear suspension on Saturday.

The Coffs Harbour local overcame a 30 point deficit to reining champion Molly Taylor, who only need to finish on the podium to wrap up the title.

However, an engine issue saw Taylor retire from the event handing the title to an emotional Quinn.

“It’s good. I have got no words at the moment,” said Quinn, who burst into tears after the final stage.

“Thanks to everyone, mum, dad and the crew. I’m so stoked.”