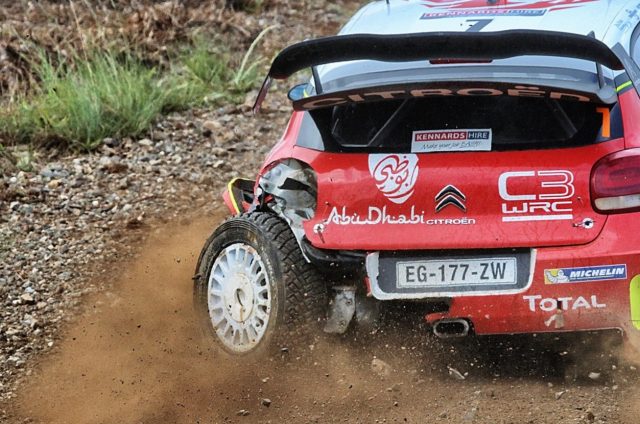 Stephane Lefebvre hit a tree in the day’s opening dry Pilbara Reverse I stage (9.93km) and although he got through to the finish control, he retired prior to the next Bucca16 test.

On that 31.9km stage the rain started to fall. Craig Breen clipped a bank and rolled his C3 WRC down an embankment. He and co-driver Scott Martin were OK.

The early runners in the stage got the best of the conditions, with the rally leaders haemorrhaging time.

Hayden Paddon (Hyundai) took the Stage 18 by 3.7sec from Esapekka Lappi (Toyota), but he was a clear 35.9sec faster than rally leader Thierry Neuville (Hyundai).

Although slow compared to Paddon, Jari-Matti Latvala (Toyota) was 9.1sec faster than Neuville to close the gap at the front to 9.9sec overall.

However, on the following first run on the Wedding Bells test Neuville took the stage by 4.7sec from Ott Tanak to hold a 14.7sec break heading into the final two stages of the event. 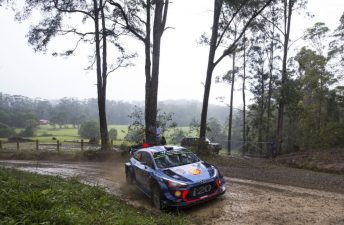 “That was a hell of a ride,” said Neuville.

“Really, really tricky conditions but I kept it on the road. It was close sometimes and I had to be clever.

“The gap now is about one second per kilometre for the two stages to come, so it should be alright.”

Tanak (Ford) was sitting in third with Paddon in fourth.

Sebastien Ogier battled the same gear selection issues which he has been experiencing since Friday in his Ford.

On top of trying to sort that, out a minor miscommunication saw him check-in to the second stage a minute early. That brought a 60sec penalty.

In the Australian Rally Championship, Subaru’s efforts to get Molly Taylor back in the event would appear to have not come to fruition.

She left parc ferme and got past the first control this morning but got no further and is back in the service park.

Nathan Quinn must complete today to guarantee the title.