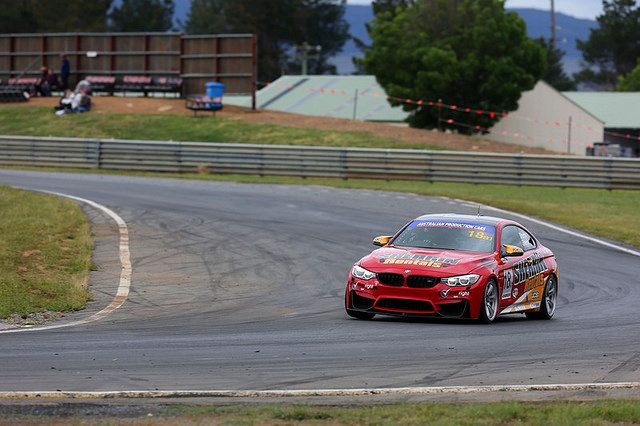 Iain and Grant Sherrin have gone two wins from two in the sixth and final round of the 2017 Australian Production Cars Series at Wakefield Park’s Shannons Nationals meeting.

The win was their third in a row after also winning the Phillip Island 4 Hour, delivering them the A1 class and outright titles.

Iain Sherrin started the #18 Sherrin Rentals BMW M4 from the inside of the front row by virtue of winning the first 300km encounter a day earlier, and it was he who enjoyed the early running at the head of the field despite the best efforts of Anthony Soole.

At the other end of the 18-car grid, Will Brown made a strong start in the #6 Skwirk Online Mercedes A45 which failed to finish Race 1, jumping from last to fifth by the end of the standing lap.

Brown picked off Nathan Callaghan (Class A2 VE HSV GT), Lachlan Gibbons, and Soole over the next six laps, by which time Iain Sherrin was 5.5s up the road.

The Super2 young gun gradually closed in and was gifted first position when Iain Sherrin ran off at the final corner of the circuit on Lap 20.

However, the Class A1 Mercedes which Brown was sharing with Rod Salmon would develop a misfire which ultimately saw them finish 20 laps down in 12th outright.

The Sherrins lead for the rest of the way, but for the final round of pit stops, and were the only duo to clock up all 137 scheduled laps.

Gibbons and Dimitri Agathos were a lap behind in the #66 FullGas Racing Subaru WRX Sti, with Soole and David Giugni rounding out the podium in the #444 Property Investment Store BMW 1M.

Soole actually ran first for most of the opening lap after a stellar launch allowed him to drive from the outside of the second row to the front of the pack, but his 1M was no match for the power of the Sherrin M4 as they came back up the main straight.

The first of the non-A1 runners was fourth-placed Scott Gore/Patrick Galang in a B1 class BMW 135i.

The #11 Team DPO Ford Focus RS of Nathan Morcom and Andre Heimgartner was plagued by electrical problems from the very first lap.

A delaminating tyre caused further issues after the gremlins were fixed, but Heimgartner finished strongly to take the chequered flag in seventh position. 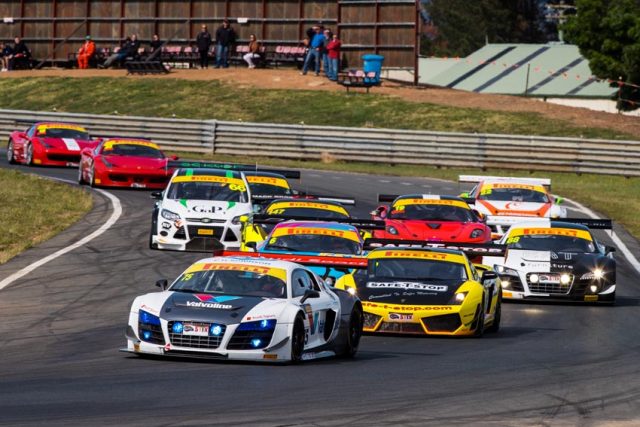 Steve McLaughlan has swept the final round of the Australian GT Trophy and in the process won the series for the second time.

McLaughlan (Audi R8 LMS Ultra) got the jump from second on the grid to take the initial lead in Race 1.

While he dropped to third through the pit stop cycle, the Jamec Pem driver passed Rod Salmon (Audi R8 LMS Ultra) on Lap 30 and then Richard Gartner (Lamborghini Gallardo GT3) on Lap 38.

The race was still not over as a contest, however, with those three waging an entertaining battle for victory until deep into the 50-minute contest.

Salmon was ultimately taken out of the running by contact with traffic before McLaughlan pulled away from Gartner to win by 5.5s in 50 laps.

McLaughlan was out in front for all but the entire race in the second encounter, spending only three laps out of the lead while others executed their compulsory pit stops.

Gartner, who had qualified on pole, finished with a pair of second placings for the weekend.

Nugara had to hold out a charging Salmon, who drove from the rear of the grid to finish fourth in Race 2.