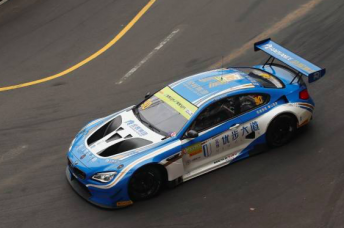 Edoardo Mortara has won the FIA GT World Cup in Macau while Chaz Mostert finished fifth after escaping contact with the barriers on the narrow Guia street circuit.

Mortara had galloped into a healthy six second lead before the race, which had only 14 starters following yesterday’s carnage, was halted when Lucas di Grassi (Audi) found the wall.

It wasn’t long before the race was neutralised again when Darryl O’Young spun at the bottom of San Francisco hill.

Mortara, driving for Mercedes, maintained his cool on the restart to win from Frijns and Engel, who charged from eighth on the grid.

Meanwhile, Supercars star Mostert endured an eventful race that saw him run as high as third when Raffaele Marciello was forced to the pits with damage to his Mercedes.

He was followed laps later when officials showed Augusto Farfus (BMW) the black and orange flag for loose bodywork after contact with Marciello.

Mostert was passed on the first restart by Engel that saw the Prodrive driver drop to fourth.

However, more drama was to come as Mostert clouted the barriers with the rear of his M6 GT3, while climbing the mountain section of the course, which allowed Farfus through to fourth.

Somehow the hit did not slow Mostert, who then managed to reel in Farfus in the final laps to finish fifth.

“Everything went well for me here in Macau, apart from qualifying,” said Mostert.

“I felt more and more relaxed after each session. I did touch the wall briefly during the race today.

“I was really lucky there. My performance was good enough for fifth place in the end.

“It was my first race on this circuit, and only my third in a GT3 car. I am completely satisfied and hope that I get the chance to come back.”