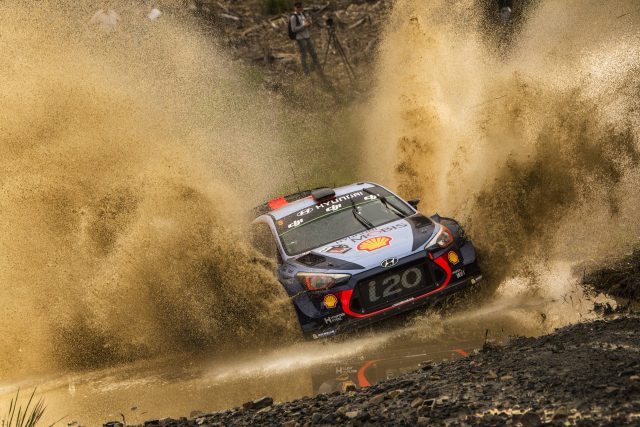 Thierry Neuville looks set to take out Kennards Rally Australia after organisers were forced to cancel the penultimate stage of the event after torrential rain hit the Coffs Harbour region.

Heavy rain caused drama on this morning’s loop of stages with deteriorating conditions on the Pilbara stage leaving officials to cancel the 9.93km test.

As a result, crews will now only tackle the Wedding Bells 6.4km Power Stage to conclude the event.

Barring a moment of misfortune, Neuville will claim his fourth win of the season and secure the runners-up spot in the championship.

The Belgian has a 14.7s lead over Toyota’s Jari-Matti Latvala, with M-Sport’s Ott Tanak in third.

Event officials were forced to cancel a Stage 14 (Newry) on Saturday due to a damaged wooden bridge.

Meanwhile, in a separate incident, Queensland Rally Championship competitors Ross Cox and Janet Binns crashed into a river after being caught out in wet conditions on Stage 9 (Nambucca).

SS20: Cancelled – This morning’s torrential rain has led to the cancellation of the next stage – the repeat of Pilbara Reverse. #WRC