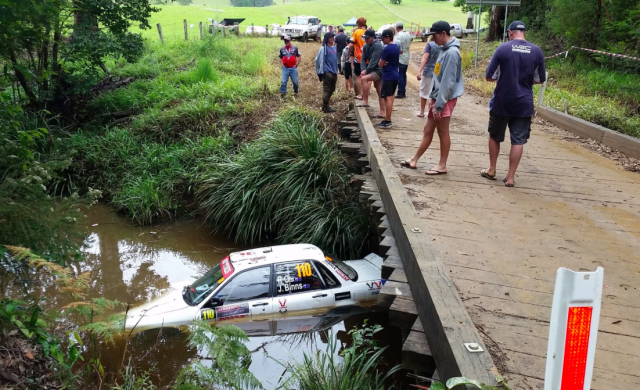 A Queensland Rally Championship entrant saw their Rally Australia bid come to an unfortunate end after plunging into a river on one of the event’s special stages.

Ross Cox and Janet Binns crashed while crossing a wooden bridge on the Nambucca stage which resulted in their Mitsubishi Gallant landing upside down in a river.

Social media reports indicate that spectators on the scene were able to attend to the car, rolling it back onto its wheels, before helping the crew leave the vehicle.

It is understood that both driver and co-driver were unhurt.

The crash was a separate incident to that which caused organisers to cancel this afternoon’s second run through the 20km Newry stage due to a damaged bridge.

WRC crews and Australian Rally Championship crews were told to return to Coffs Harbour after Stage 13.

@MickBramble @parsowj @carey_fraser Scary shit. Car was upside down in the water. We had to roll it over to get them out. Very lucky there was enough man power to roll it over. @RallyAustralia pic.twitter.com/3d7o0mXXGg