Neuville in command after stage cancellation

Neuville in command after stage cancellation 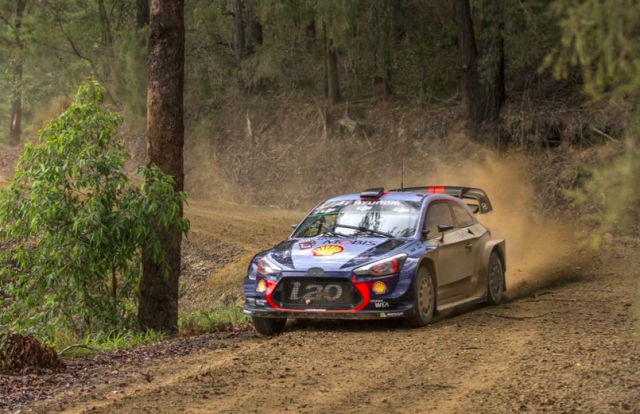 Organisers cancelled Stage 14, the second run through Newry (20.87km), due to a damaged bridge on the route, which resulted in crews being told to return to Coffs Harbour early.

It is understood a competitor made contact with the bridge on the morning’s earlier run.

The abandonment left Hyundai’s Neuville with a 19s lead over Toyota’s Jari-Matti Latvala after taking wins on Stage 12 (Welshs Creek) and the televised Stage 13 (Argents Hill).

The Belgian had inherited a 6.7s lead in the morning after team-mate Andreas Mikkelsen retired after sustaining two punctures on the first run through Newry.

Neuville blitzed Stage 12 to beat Latvala by 9.9s before taking another 2.2s out of the Finn on the next stage.

“We are pushing hard but I try to keep the four wheels on the road to be clean and efficient,” said Neuville.

“The rally is still long so we need to be focused and careful.”

The Northern Irishman hit a bridge on the afternoon’s first stage damaging his right rear suspension, which has ultimately put him out of the rally.

Meeke attempted to complete a temporary repair but his efforts proved unsuccessful.

As a result, Tanak is now 2.1s shy of second-placed Latvala while Craig Breen has moved his Citroen to fourth, with New Zealand’s Hayden Paddon in fifth.

Newly crowned five-time world champion Sebastien Ogier is sixth after an eventful afternoon that saw him sustain damage to the front of his Ford Fiesta following a run in with a bank on Stage 12.

Citroen’s Stephane Lefebvre is seventh for Citroen ahead of Wales Rally GB winner Elfyn Evans, with Toyota’s Esapekka Lappi the last of the WRC runners.

Rising star Kalle Rovanpera completed the top 10 in his WRC2 Ford Fiesta despite suffering a puncture.

In the Australian Rally Championship, Quinn continues to lead reigning champion Molly Taylor, although there are question marks surrounding the latter after smoke was seen bellowing from her Subaru at the end of Stage 13.