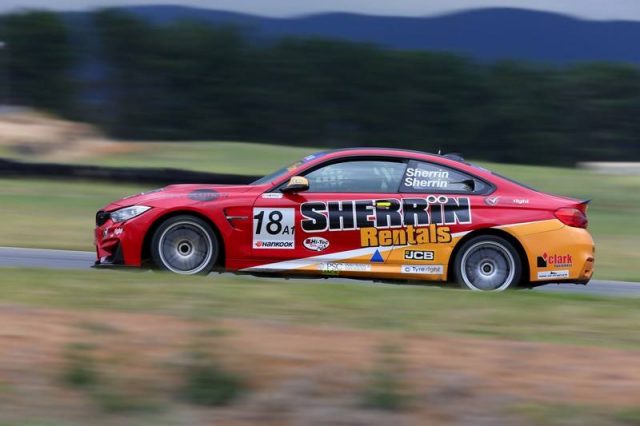 The Sherrin Rentals crew stretched the fuel tank in the #18 BMW M4 to 72 laps for Grant Sherrin’s race-ending stint, allowing them to take a 50-second win.

Nathan Morcom and Andre Heimgartner in the #11 DPO Ford Focus RS proved to be the only real competition for the Sherrins but a green flag pit stop damaged their chances.

Iain Sherrin made a good start from pole to take the early lead as Rod Salmon (#6 Skwirk Online Mercedes A45).

Morcom made an aggressive move to pass Salmon up the hill on Lap 2, but was losing ground to car #18 until a Safety Car was called on Lap 27 for a stricken Suzuki Swift in the outfield.

The first A1 class car to come to grief was the #66 FullGas Subaru WRX STi of Dimitri Agathos and Lachlan Gibbons, when the former drove into the shed with a loose left tie-rod.

Rain began to fall under Safety Car and Morcom took advantage with his all-wheel-drive Focus to engage in a thrilling stoush with Iain Sherrin.

Morcom forced his way past up the hill upon the restart but Iain Sherrin lead again by the end of the lap.

Morcom got past again and enjoyed seven laps in the lead before Iain Sherrin reclaimed the position as the rain eased.

He cleared out to a 10.5s advantage before pitting under the second Safety Car period of the race, prompted by the next A1 casualty when Salmon’s Mercedes ground to a halt on the side of the circuit.

While Iain handed over the Grant Sherrin after 54 of the scheduled 137 laps, Morcom and the other A1 competitor in Anthony Soole (#444 Property Investment Store BMW 1M) stayed out.

Grant Sherrin beat the train as he exited the pits to stay on the lead lap, and that proved pivotal as Morcom took his Ford to the very bottom of its fuel tank before pitting under green on Lap 70.

Heimgartner resumed a lap down to Soole and Grant Sherrin, with the former pitting for the final time at the end of Lap 81 and dropping two laps off the pace.

While the Sherrins originally appeared to also need another pit stop for fuel, bursts of heavy rain which initially favoured Heimgartner in the all-wheel drive saw fuel consumption drop, and furthermore caused the race to run to a time-certain finish 11 laps short of the 137.

The win was their second in a row after taking victory in the Phillip Island 4 Hour in September.

Behind the #18 M4 and #11 Focus, Agathos/Gibbons fought back from as low as 15th to complete the podium, albeit five laps off the pace.

Soole and David Giugni faded to fourth after the latter spun in the rain during his stint, while Class C competitors Tyler Everingham and Calum Jones (#31 Osborne Motorsport Renault Megane RS265) were a commendable fifth outright.

Another 137-lap race will cap off the season tomorrow from 1420 local time/AEDT. Gartner (Lamborghini Gallardo GT3) will share the front row with Steve McLaughlan (Audi R8 LMS Ultra) for the first of two 50-minute races, which starts at 0915.