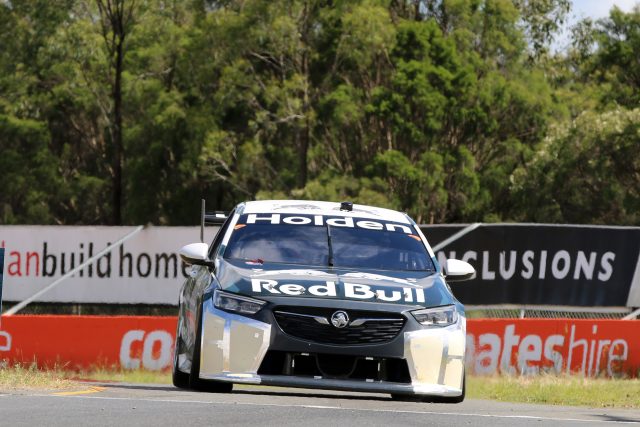 Holden teams are up in arms over the cost of Triple Eight-supplied ZB Commodore body kits, now projected to be close to $50,000 per car.

Most of the independent Lion squads are protesting because they believe factory backed Triple Eight is exploiting its Holden-sanctioned monopoly on the new racing panels.

Triple Eight boss Roland Dane maintains he is charging a fair price to recoup the seven-figure investment he has made in the design, tooling and production of the bespoke parts needed to reskin a VF racer.

Speedcafe.com has learned that the row has been simmering since before the Vodafone Gold Coast 600, where the other Holden team bosses and senior Supercars executives met with Dane to try to thrash out a more affordable deal.

But the talks ended in a stalemate, with Dane refusing to lower the price, and no progress has been made since the stormy summit towards some sort of cost relief.

Holden has been dragged into the dispute, with calls for Fishermans Bend to subsidise the price of at least the initial supply of ZB body kits.

Allied concerns about the availability of the separate kit of production pressings also required to convert a VF to a ZB have been allayed by Holden, which has secured an extra advance supply from Germany ahead of the new imported Commodore road car’s launch in February.

Speedcafe.com revealed two months ago that teams upgrading to the ZB racer look were facing a bill of more than $40,000 per car for more than 30 new inner and outer pieces.

The Holden parts are expected to cost around $10,000 per car, while the Triple Eight components were preliminarily priced at more than $30,000 a set.

But since then, Holden teams report that the anticipated final cost of the ZB aero kit and other racing replacement panels will be nearer $50,000, taking the total conversion cost for a single car to close to $60,000.

Dissenting Holden team bosses question Dane’s assertion that the cost of bringing the ZB body kit to production, along with funding the new model’s homologation, is up to $1.5 million.

Their own estimates range from $300,000 to $800,000, leading to the widespread conviction that Triple Eight is profiteering.

The source of the dispute is that Holden granted Triple Eight Race Engineering exclusive rights to the IP and sale of the ZB body kit as part of the deal to take over as the Holden Racing Team.

To achieve a big cut in its Supercars budget, Holden handed over all responsibility for homologating the ZB racer to Triple Eight in return for it becoming the sole supplier of the body kits with the discretion to set pricing.

Previously, Holden funded the whole homologation process, including engineering support, and provided moulds to Holden teams to produce their own composite replica panels and aero parts.

Until the Commodore ceased local manufacture late last month, the car-maker also had ready access to slightly spoiled production body panels, which could be intercepted on the assembly line and supplied to teams at no or low cost.

Now the production pressings still used in the ZB racer have to be sourced from the factory in Germany, increasing their cost to Holden and, consequently, the teams.

Dane has remained unswayed since the Surfers stand-off, which was held on the Saturday of the GC600 and also attended by Supercars CEO James Warburton, CFO Shane Howard and Supercars Commission chairman Steve Horne.

Warburton had previously clashed with Dane over his efforts to broker a better deal for the other Holden teams.

Dane denied there had been a general uprising among the Holden teams over the cost of the ZB body kit, asserting there was only a single dissenter at the Surfers talks.

“All the Holden teams met to discuss panel supply,” he told Speedcafe.com.

“Only one team was concerned about the cost. One person was stirring it up.

“I believe we’ve now resolved it. The majority have accepted the cost.”

However, other Holden team chiefs contradicted Dane, confirming there was general discontent.

“The teams are pretty pissed off about it,” a Holden team owner told Speedcafe.com.

It is understood the only Holden teams that haven’t rebelled are Tekno Autosports, which has a customer car deal with Triple Eight, and Garry Rogers Motorsport, which reportedly has a separate arrangement to be the authorised panel repairer for southern states squads.

The only concession at the GC600 meeting was that an approach would be made to Holden to pay for the initial batch of body kits to convert their VFs to ZBs.

As far as Speedcafe.com can determine, Holden has made it clear it will not subsidise the cost of either the racing body kits or the package of production panels.

However, Holden has ensured the availability of the required imported body panels by sending its motor sport consultant Peter Harker to Opel in Germany to secure supplies.

Production panels were so difficult to source initially that Dane had to resort to getting early examples from a Vauxhall dealer friend in the UK to begin construction of the prototype ZB racer many months ahead of production.

If unresolved, the resistance to the cost of Triple Eight’s body kit could slow the other Holden teams switch to the ZB look.