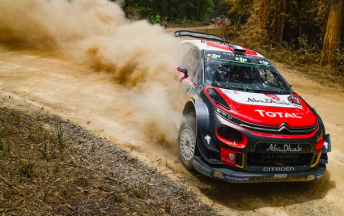 The offence came after he had been stopped by police for overtaking a van towing a trailer on a road marked with continuous white lines.

The fine is suspended but will be enforced if he incurs any further infringements.

“The video shows that car No. 7 first overtakes an unmarked police car on a double continuous white line and then, two minutes later, the above-mentioned van with a trailer,” read a report from the stewards.

“The speeding and the overtaking by crossing the double continuous white line on two occasions during this incident are viewed as one single traffic infringement and note that the competitor was already penalised by the Clerk of the Course for the speeding offence under Art. 20.3.1 of the 2017 FIA WRC Sporting Rregulations.

“However on this incident the driving manners of the driver represent not only a breach of the local traffic laws but also a clear infringement of Art. 12.1.1.c of the 2017 International Sporting Code.

“The stewards therefore after due deliberation decide to levy an additional fine of €2000 onto the driver of car No. 7 Stephane Lefebvre.”

Lefebvre is lying in seventh position in the Kennards Hire Rally Australia standings after Stage 13.