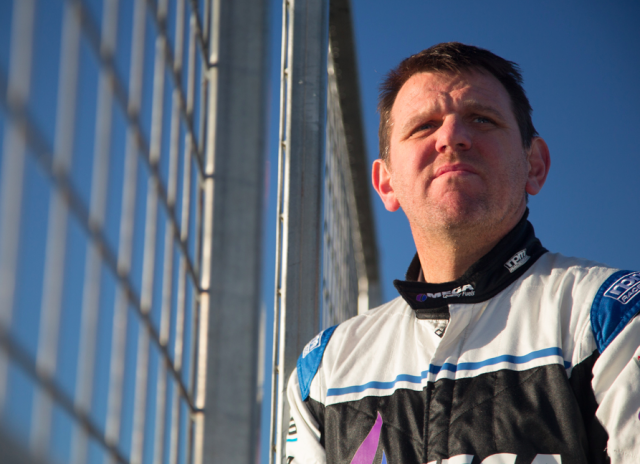 Supercars veteran Jason Bright will retire from full-time racing after next week’s Coates Hire Newcastle 500 amid moves to untangle his entry from Prodrive Racing Australia.

Bright, who at 44 is Supercars’ eldest regular driver, has confirmed to Speedcafe.com that he is quitting his active involvement to devote more time to his young family and expanding business.

Uncertainty over the future of his contract with PRA, which is using his Racing Entitlements Contract (REC) to underpin the entry of its fourth Falcon FG X, is also a major factor in his decision.

“There are plenty of reasons why,” Bright told Speedcafe.com.

“I’ve had an extremely good career and I just think the time’s right.

“This year we’ve made good progress, but I’m not quite where I want to be and I don’t want to stand in the way of any good young drivers coming in.

“I’m happy with how I’ve gone over the years and I’ve had some great relationships with the teams I’ve driven for.”

‘Brighty’ will end his full-time Supercars career after 572 V8 championship starts (assuming he lines up for both 250km legs of the Newcastle 500) and 20 victories in races counting towards the title.

He also won the non-championship 1998 Bathurst 1000 with Steven Richards.

Bright, who is open to offers to co-drive in the endurance races next year, has no interest in fielding his own team.

As PRA bids for one of Lucas Dumbrell Motorsport’s RECs to run Richie Stanaway as a fully fledged entry from next year, Bright’s licence has been targeted by Matt Stone Racing to promote Dunlop Super2 Series title contender Todd Hazelwood to the main game next year.

Bright, who signed a two-year contract to field his Britek Motorsport entry under the PRA banner, was reticent about widespread speculation that the deal was at an impasse.

He maintained that a possible sale or lease of his REC was dependent on the outcome of negotiations with PRA and ensuring that he wasn’t left liable to the financial penalties of his entry not being utilised.

“I’m not going to run my own team,” he declared.

“I have people interested in the REC, but at the moment it’s still contracted to PRA to run.

“I need to do what’s right for me and my family, and to make sure the REC is going to get run next year and I’m not exposing myself to any risk.

PRA is known to want to secure its own REC from the carve-up of LDM, which is in the midst of a takeover by sponsor/benefactor Phil Munday, contracting to a one-car customer Falcon FG X.

Bright’s REC has been targeted by the backers of Matt Stone – the son of former Supercars powerhouse Stone Brothers Racing co-owner Jimmy – to promote Super2 young gun Todd Hazelwood to the main game.

According to Bright, his availability next year as a co-driver will depend on where his REC ends up.

“Obviously, I’m keen to still do some racing, but it’s not something I’ve put a lot of thought into yet,” he said.

“I still have to sort out things with Prodrive because they have a contract to use my licence again next year and for me to drive as a co-driver when I retire from full-time racing.

“So what happens with that will determine whether I’m available to co-drive anywhere else.”

Brighty struggled until recently with his switch from Brad Jones Racing, where he scored three race wins in six years, to PRA this year, returning to the former Ford Performance Racing where he was successful in 2005-06.

Despite recent gains, he made the decision to retire from full-time racing because of the uncertainty of his future as a driver and wanting to spend more time with his wife Lucy and their young children, Lennox and Jemima.

Also making increasing demands on his time is his fast-expanding enterprise Taskforce, which is a reliable source for tradespersons.

“This year I’ve been busier than ever,” he said.

“It’s probably the busiest racing year I’ve had in the past decade and my business is booming.

“I’m flat-out with that any time that I have spare from racing – and family life gets busier every year as well.”

He rates the highlights of his V8 career as his Bathurst victory and scoring BJR’s first two Supercars race wins at Barbagallo and Winton in quick succession in mid-2011, plus his and BJR’s emotional success in claiming the first Jason Richards Memorial Trophy at Pukekohe in 2013.