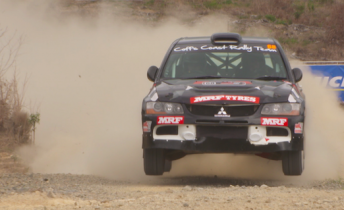 A round up of the opening leg of the Australian Rally Championship finale at Kennards Hire Rally Australia.

Quinn and co-driver Ben Searcy put in a near-perfect performance to win four of the day’s seven stages.

Taylor and co-driver Bill Hayes knew before the event they only needed a podium position to win back-to-back titles and the pair are on target to achieve the feat, holding down third outright for much of the day, before edging into second by day’s end.

The pair overcame an intercom failure in stage two with some innovative hand signalling, the issue not upsetting their rhythm as they went on to post consistently fast stage times, topping the table on stage six.