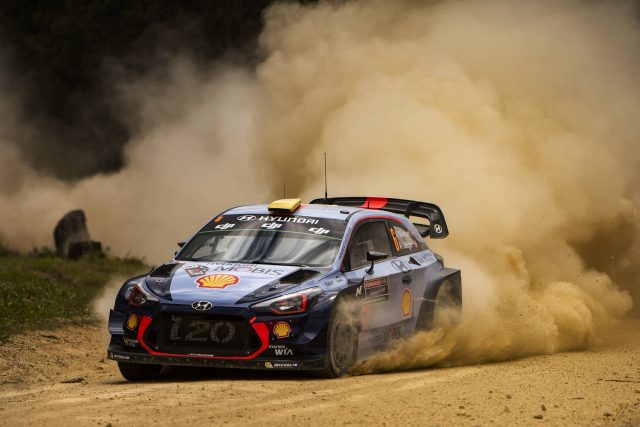 Andreas Mikkelsen has extended his healthy early advantage at Kennards Hire Rally Australia after an impressive run through the afternoon stages.

The factory Hyundai driver has opened up a 20.9s lead over Citroen’s Kris Meeke after claiming another two stage wins following the second run through Pilbara (9.71km), Eastbank (19.05km) and Sherwood (26.68km).

Mikkelsen, who won the opening three stages this morning, continued to take advantage of his lower starting position and swept roads in his i20.

He finished 0.1s shy of Hyundai team-mate Thierry Neuville, who took victory on Stage 5, before finishing the loop by topping Stage 6.

“It has been really amazing and I’m really enjoying my third rally with Hyundai,” said Mikkelsen.

“There are still two stages to go but things are looking very good. With these roads and this car I can do exactly what I want.”

Meeke maintained his strong start after finishing fourth, third and second on the stages despite suffering some damage to his Citroen C3 early in the loop.

Toyota’s Jari-Matti Latvala initially dropped to sixth after sustaining damage following contact with a pole on his run through Eastbank, but recovered to fourth after Stage 6, albeit 30.4s behind.

Citroen’s Craig Breen slid to fifth for Citroen, after he was lucky not to drop significant time when his right rear tyre was off the rim after Stage 4.

New Zealand’s Hayden Paddon, also on softs, had showed signs of a return of form in the third Hyundai i20, that resulted in a fourth on Stage 5.

However, increased tyre wear on the next stage saw the Kiwi drop time, leaving him seventh overall behind M-Sport’s Ott Tanak.

“I’m just trying to remember how I used to drive the car and it felt a bit better,” said Paddon after Stage 5.

“We had one bad tyre going into stage, felt like we had a puncture during second half of the stage,” he added after the final stage.

Hampered by having to sweep the roads Ogier’s struggles were compounded by further electronic issues.

The Ford driver lost 11s on Stage 5 before dropping another 2.2s on the final stage of the loop. The Frenchman sits eighth 48.1s adrift of Mikkelsen.

“It has been a tough day for us. We tried our best with what we had but it’s not easy,” said Ogier.

“We tried to work out what we could on the road section and somehow paddle shift was working again but it was very inconsistent.”

The top 10 was rounded out by Citroen’s Stephane Lefebvre and Elfyn Evans in the DMACK tyre shod M-Sport Ford.

The WRC field was completed by Toyota’s Esapekka Lappi in 11th as he continued his recovery following a power steering issue on the second stage this morning.

Rising star Kalle Rovanpera was the top runner in WRC2.

Brendan Reeves is the top Australian driver in 13th overall, driving an AP4 Mazda, one place ahead of  Australian Rally Championship (ARC) contender Nathan Quinn, who hit trouble on Stage 5.