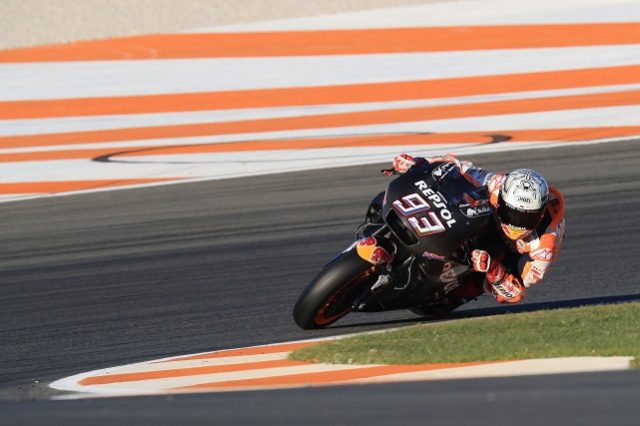 Marc Marquez has set the fastest lap as MotoGP’s post-season test at Valencia drew to a close.

Marquez and his Repsol Honda team-mate went one-two on Day 2, with Tech 3 Yamaha’s Johan Zarco third-fastest and Jack Miller eighth on his second day on a Pramac Ducati.

He went on to set the fastest lap of the test altogether in the final hour before marginally improving on the next lap in clocking a 1:30.033s.

The effort put him a full four tenths ahead of Pedrosa, who also set his best lap in the latter stages of a day in which the factory Honda riders spent time on the 2017 and 2018 bike.

Tech 3 privateer Johann Zarco, who continued to trial the 2017 Yamaha chassis, was the quickest representative of the Japanese marque, finishing 0.003s behind Pedrosa despite a Turn 4 off midway through the seven-hour session.

Jorge Lorenzo made up the top four for Ducati, with his factory team-mate and 2017 runner-up Andrea Dovizioso ending his Wednesday program early and winding up only 15th.

Viñales spent much of the day trialling Yamaha’s new aero fairing, before returning to the standard version and moving up to fifth in the running order.

His team-mate Valentino Rossi placed seventh with the 2016-spec chassis.

Cal Crutchlow finished between the Movistar Yamaha pair as he logged a day-high 72 laps for LCR Honda.

Miller was first out on track in the morning and crashed on his third lap, lamenting a lack of heat in the tyre.

Having shunted his only bike, he was sidelined for three hours as a result, before returning to the track and eventually ending up eighth.

Maybe it was too soon for @jackmilleraus 😣

The Australian slides out at turn 10 with the track not up to temperature yet! #2018StartsNow pic.twitter.com/cBqcILovt3

Suzuki’s two riders had sat out Tuesday due to a virus, but ran sizeable programs on the second day of the test.

Andrea Iannone wound up ninth in the order, having suffered a crash at Turn 2, while Alex Rins placed 14th.

The Red Bull KTMs were next, with Pol Epsargaro 11th despite a crash and a mechanical failure, and Bradley Smith 12th.

Both were among the crashers on the day, with Tito Rabat and Scott Redding, newcomers at Avintia Ducati and Gresini Aprilia respectively, also falling off their bikes.

Aspar Ducati riders Karel Abraham and Alvaro Bautista both sat out the day as a consequence of their respective crashes on Tuesday.

Some teams will move on to Jerez for further testing, with the next official test at Sepang on January 28-30.