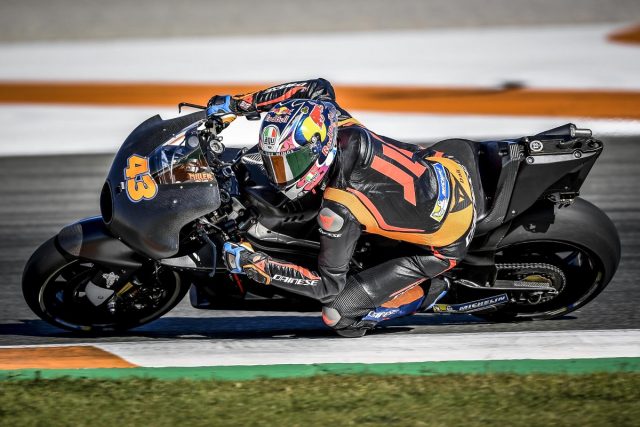 Jack Miller says that the Ducati suits his riding style after his first outing on the Desmosedici GP17 in post-season MotoGP testing at Valencia.

Miller completed his first running for his new team, Pramac, finishing the first of two days of testing at the Circuit Ricardo Tormo as the fastest Ducati rider and fifth overall.

He says that the Ducati is a good fit for him, though he will have to get used to its superior acceleration.

“This morning on completely used tyres I got a little bit carried away there, and I was able to spin the hell out of the tyres,” Miller recounted.

“So I definitely have to be a little bit more gentle on the wrist, I think, but the rest of the bike seems to suit my style.

“The braking stability is really, really good on it; I haven’t really found the limit on it in terms of braking, because it’s just so strong.”

The test marked the first time that Miller has piloted anything other than a Honda in the premier class.

However, the Townsville rider says that he has not had to make significant adjustments to how he rides the Ducati.

“Not an awful lot,” Miller replied when asked if he was doing anything different on the GP17.

“The bike definitely doesn’t wheelie as much as the other thing did, and I’m enjoying that, because I can focus more on riding, especially on a tight go-kart track like we’ve got here at Valencia.

“The rest of it is just step-by-step adapting; how the bike accelerates, how the bike enters, and also mid-corner, and the different lines you sometimes have to take.

“The two (bikes) are completely different.”

Miller’s team-mate Danilo Petrucci and Ducati’s factory riders Andrea Dovizioso and Jorge Lorenzo are riding modified versions of the GP17 at Valencia before testing the GP18 in the new year, while Miller will continue to ride the GP17 in 2018.

The second day of the post-season test starts tonight at 2000 AEDT.