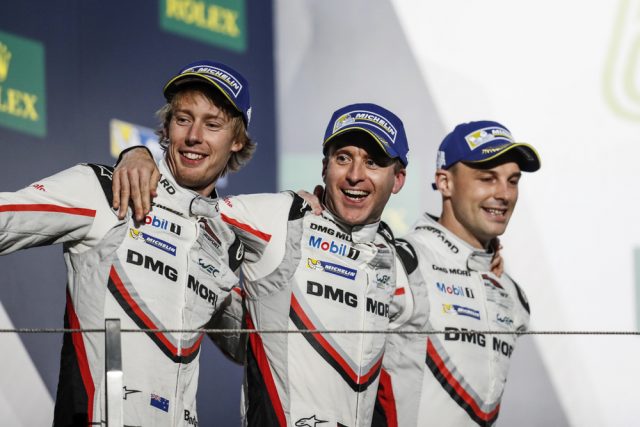 Brendon Hartley and Earl Bamber will enter this weekend’s World Endurance Championship finale in Bahrain with mixed emotions as Porsche prepares to abandon its LMP1 program.

The New Zealanders share a special place in the history of the German manufacturer, with Hartley having won the championship for Porsche and Bamber the Le Mans 24 Hours in 2015.

This year, they combined with German Timo Bernhard in the #2 919 Hybrid to win both Le Mans and also the championship with a race to spare.

Their triumphs contribute to a three-year streak of Le Mans, drivers’ championship, and manufacturers’ championship titles for Porsche in just four years of the LMP1 program.

Bahrain, however, marks the final race for the 919s as the German marque prepares to move into Formula E from 2019/20.

“Going to Bahrain will be emotional for all of us, especially as we arrive as world champions with less pressure now,” said Hartley.

“I have so many incredible memories and experiences with the 919 Hybrid, team-mates, and all the boys and girls from the Porsche LMP Team. We shared something very special together.

“After developing the Porsche 919 for more than four years, it’s an absolute dream to drive so we will all be enjoying every last lap with this awesome machine.

“On one side there will be a lot of sadness, but on the other hand we will be giving everything to give this project the ultimate send-off it deserves.”

Bamber came through the Porsche ladder via Carrera Cup championships and the Porsche Supercup, which he won in 2014, and says that the nature of his rise makes the moment more significant.

“Two Le Mans wins and now the world championship – there is a lot I can thank Porsche for,” reflected the 27-year-old.

“It was very special for me to join the Porsche LMP1 program back in 2015.

“It was one of my first ever tasks as a Porsche works driver when Fritz (Enzinger, LMP1 vice-president) and Andreas (Seidl, LMP1 team principal) and everyone in the team believed in taking a Carrera Cup driver to Le Mans. That was amazing.

“I was back in the GT program in 2016 and then becoming one of the main LMP drivers has been a fantastic year in which I was learning a lot.

“The race weekend in Bahrain will be challenging and we will give it our best.

“It will be very, very special to see two cars in the museum forever having my name on the side. The Porsche 919 Hybrid will always bring back special memories.”

Hartley is expected to be named as one of Scuderia Toro Rosso’s drivers in next year’s Formula 1 championship, having been called up to the team for the United States Grand Prix.

Bamber will remain under contract with Porsche, though the identity of his seat for 2018 is unknown.

The ninth and final round of the 2017 FIA World Endurance Championship takes place this weekend (November 16-18 local time).