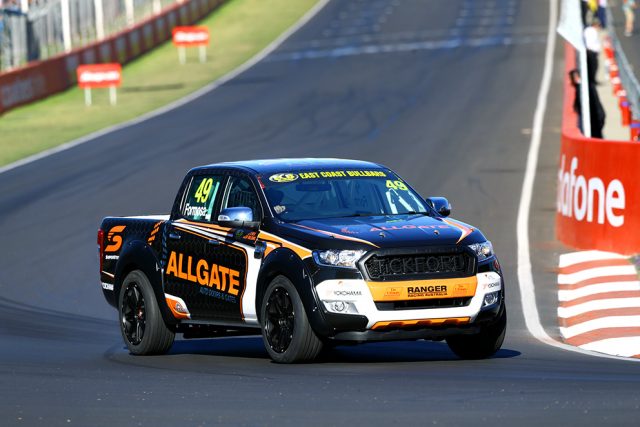 The prototype Ford Ranger at Bathurst

A field of 12 to 16 SuperUtes is expected for the first round of the inaugural ECB SuperUtes Series in Adelaide next year.

Speedcafe.com understands that 14 kits have been ordered so far, with entries spread across all six models which are set to be homologated.

Supercars itself is believed to be leasing one Holden Colorado to place a big-name driver in the fledgling series.

However, the bulk of the field is set to be made up of existing V8 Utes teams, led by Sieders Racing Team.

Luke Sieders has now committed the team to another Toyota Hilux on top of two Hiluxes and Mitsubishi Tritons which had previously been locked in.

There is also the possibility of another Triton, which would take the team’s fleet to a total of six.

Two of the Hiluxes are Western Sydney Motorsport entries, for which Sieders currently campaigns two cars in V8 Utes.

Ross Stone Racing will run three entries of its own in a mixture of models.

V8 Utes stalwart Kim Jane is in the frame to race the latter, pending funding.

“I’ve been working hard with Ross Stone on it, in a Colorado,” Jane told Speedcafe.com.

“We’re not quite there yet but we’re part of the way there. We’re well and truly on our way to finding the money; we’ve got a percentage of it but we’ve got to find the rest, obviously. 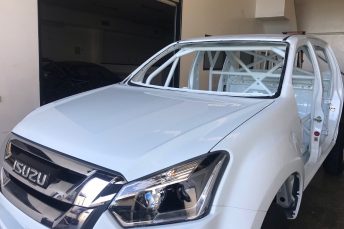 The former Supercars Championship-winning team owner will also prepare the Isuzu D-Max which is being entered by Steve Wilson.

Peters Motorsport was one of the first confirmed entries when it and Ryal Harris committed to campaigning a Mazda BT-50 upon the public launch of the first two SuperUtes at Townsville in July.

It is understood that the team will enter at least one more car, though the identity of the model is unknown.

A new name to the entry list is Queenslander Stephen Southgate, who is believed to be building a Colorado.

Meanwhile, Stone has confirmed to Speedcafe.com that the Hilux will be on track before the end of the month.

The Ranger, which is all but complete as a race car, and Triton have already made on-track appearances in public and also in testing.

Work is ongoing on the D-Max and Colorado, while Peters Motorsport owner Rod Dawson has told Speedcafe.com that the BT-50 will be built up after the final V8 Utes round at Newcastle later this month.

The ECB SuperUte Series will kick off at Adelaide next year (March 1-4).